I don't often reverse a position when stopped out. Usually the failure of a trade in one direction does NOT automatically mean that the opposite direction offers good opportunity.

Most often when they do occur it's because I'm attempting a counter-trend trade and find myself caught in a trap. The stop and reverse allows me to minimise damage and possibly even profit on return to the with-trend direction.

The opposite though, is rare. Reversing a with-trend trade into a counter-trend trade does not happen very often. And when it does, my expectation is NEVER for a complete trend reversal. Rather I'm looking to profit off a small reversion to the mean. And most often this will be done with a reduced position size.

Here's one example of the rarer counter-trend reversals…

The trend was tentatively changed to downwards at A, with the change confirmed on continuation down to B. B's break of C was weak though, extending only two ticks, so entry on the first pullback to D was avoided in preference for a second chance entry on the failure of bar E. Entry was sought intra-candle on the lower timeframe in expectation of a continuation of the downtrend. Part one would target just inside the prior low at B with part two running to the 86.80 region. 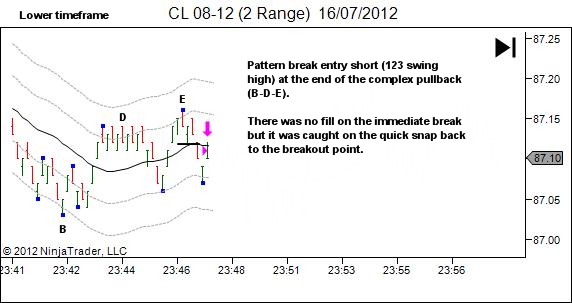 Price stalled post-entry but then fell easily to the first target. 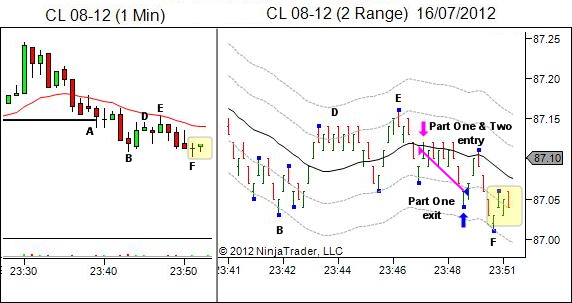 Price reached a new low at F, again by only two ticks, before entering a two minute stall shown in the yellow shaded region.

Active trade management requires that we monitor price action bar-by-bar in order to confirm that its behaviour continues to match our premise.

A true bearish sentiment should have pushed price much lower, driven by longs stopping out and new shorts chasing breakout profits. This didn't occur. Price held above the 87.00 level indicating greater demand at this level than I anticipated.

When the premise is threatened (but not immediately indicating danger) the plan is to work an exit through movement of either the stop and/or target. In this case the stop order for part two was moved to just above the stall region. The target remained in its original location on the odd chance that the stall did break downwards.

Two minutes stall though is a lot of time to reassess.

There is obviously a lot more demand at the swing low C / 87.00 level than I had anticipated (I know… with hindsight it's obvious as the swing low C looks a great level… but my expectation was that it would break).

This thing is not going down. So I want out if price breaks above the current stall region.

Why the stop and reverse though, rather than just stop and exit? Simply due to the tight nature and the extended duration of the stall following the breakout failure at F.

Whenever you get price action that builds up tension like this, expect a directional move on breakout. Other people like me, operating on these short timeframes and trapped in a short position, are swearing at their screens, willing this thing to keep falling. They're all going to exit if price rallies and breaks the high of the prior two trading timeframe candles. This built up tension, combined with a vacuum above, will allow at least a pop back up to retest the vicinity of D/E.

So that's my criteria for a stop & reverse… finding myself stuck in a tight little trap that builds stress over an extended period of time, and allows entry with small risk, on a break of a significant trading timeframe candle. And they're held only with expectation for a retest of prior swing highs or lows; never with any thoughts of a complete reversal. 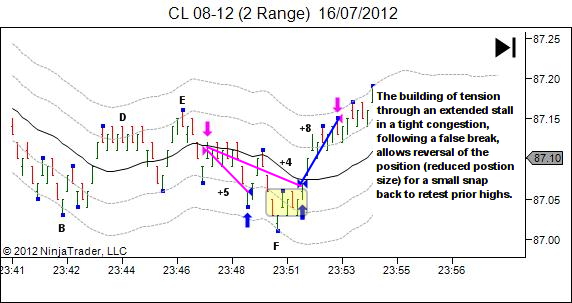 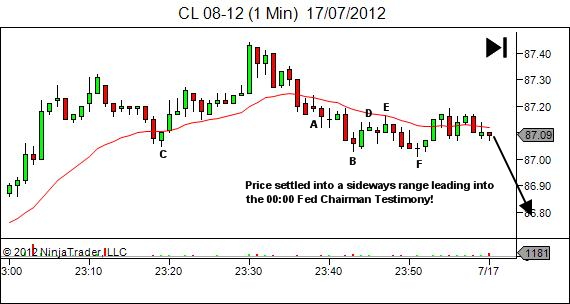 Let's go over this key concept one more time. Don't overcomplicate things. Keep in mind a visualisation (or a series of visualisations) which broadly capture the vast majority of your trades. It can help provide confirmation of the trade idea as it's setting up. And more importantly, confidence in execution.   We discussed this…

One thing I love to do over the Christmas & New Year break is to schedule a couple of days for Market Replay learning. Last Sunday & Monday were scheduled for my replay sessions. The ability to speed up the market data in-between key decision making areas means that I can squeeze in half…

I don't know if you're like me, but if you are then you'll have this dark-side of your personality that surfaces from time to time. A side that just WANTS TO TRADE. A side which doesn't so much care about the conditions of the market. Given the slightest hint of opportunity, it wants to…

A great email question from Mike: I know you don’t trade stocks but I’ve always read that you leave gaps alone due to reversals. But take LOCM today; what’s the buy point? I’m thinking $4.30 or is this to soon, or would $4.50 be the safer buy. I found it at $4.30 but stayed away…

I shared the following post via social media recently:   Without doubt, this is one of the key lessons we must learn on the way to becoming a professional trader. And so I was incredibly pleased to get the following reply: Brilliant! Thanks A.H. This is exactly the right approach to the presence of the…