More great email Q&A, that allows us all to learn…

I would like to know what would you do if you are faced with the trade situation as in shown in the attached files. I’m seeing in the one-hour chart that the supply and demand is in equilibrium, then supply is greater than demand at point A (unbalanced). Then I tried to use the smaller timeframe (15-mins) to find an entry point. I would enter short position at point B. But after moving the screen forward, my entry was wrong. Now I would like to know from your perspective, what mistake did I make? Thanks.

Charts (as per attachment): 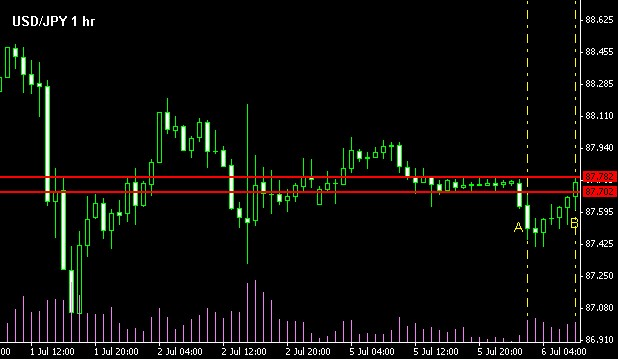 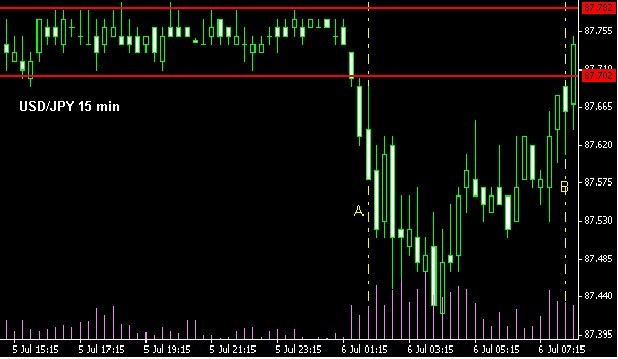 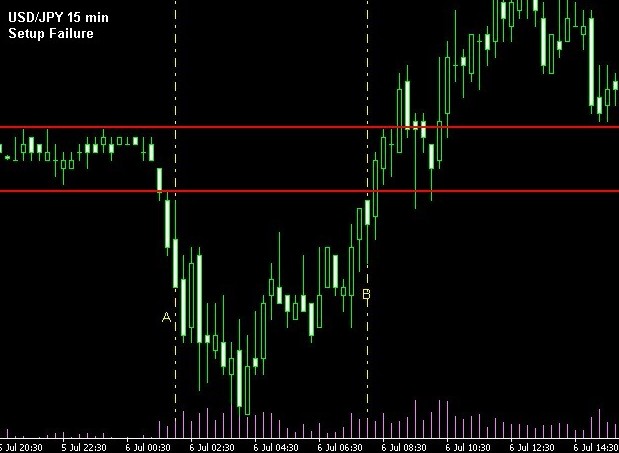 Let’s look at what I see. We’ll start with the price action on the 1 hour chart. 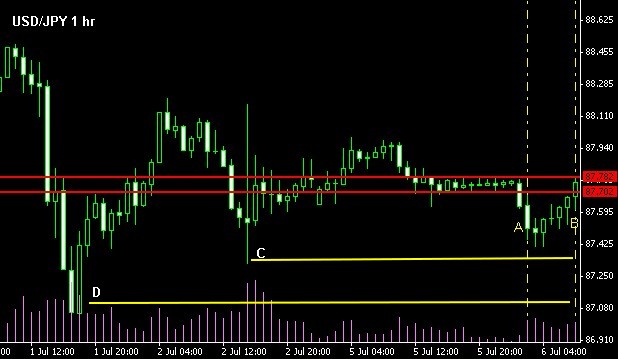 You’ve correctly identified point A as being a break below an area of congestion. And as you said, that is an indication of a supply/demand imbalance, with the shorts taking control of the market at that point.

The question though is whether the breakout push is only a result of immediate breakout orderflow (entry orders short on breakout, and stop losses for anyone long in the congestion) in which case it won’t persist for long, or whether it will attract additional selling that will be required to drive prices further through the lower support areas.

The move is occurring right into two areas which show a previous supply/demand imbalance in favor of the bulls. Refer to areas C and D in the chart above. Note the rapid rate at which price rallied from C and D, indicating strong demand.

It is reasonable to expect buying in the vicinity of C and D, should price return towards these areas.

For the breakout to continue through these areas, additional selling would be required from higher timeframe participants to continue driving price lower.

However, the 15 min chart (below) shows us that price could not even get as far as C. The significant overlap between candles, and lower tails show considerable buying coming into the market to absorb whatever selling was occurring. Three attempts to break 87.500 all failed. 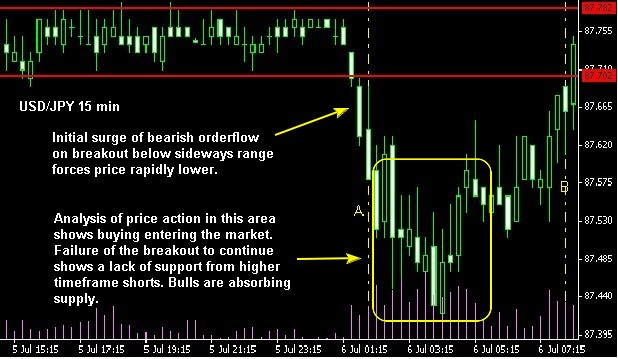 Have a look now at the following chart. 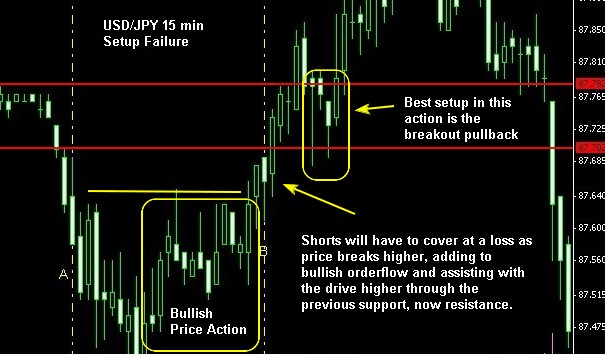 Momentum analysis of the price action in the lower box shows strength to the bullish side. (The YTC-PAT ebook discusses momentum analysis). Bulls are wining this battle.

A break back above the congestion will force all shorts to cover and provide considerable bullish orderflow to oppose any shorts that will enter on a retest of the original breakout point.

That’s how I see it (accepting this is with the benefit of hindsight). I have no problems with watching price action at the retest point (what you called point B) to identify an entry short. However don’t just blindly place orders to enter at S/R. Analyse the price to identify the likely future direction and only take a trade in your expected direction (short) if price action confirms your premise. In this case, price did not confirm the premise. It pushed easily through the area of resistance, and set up for a nice breakout pullback entry long.

So… in your analysis, don’t just search for areas of strong breakout as a potential source of future supply/demand imbalance. Consider as well whether there is any opposing force which may work against your trade premise.

I received an excellent email during the week, in response to the above article.

The question relates to the last chart, and my statement that the breakout pullback offered the best entry in this price action.

I just read your latest newsletter. I really appreciate these. Awesome training to see a professional analyze! But I have a question.

You wrote that the best entry would have been to buy on the pullback to the support. But when I first looked at the picture, a thought that the strong breakout above the higher boundary of the congestion and then the fast pullback below that level could suggest that it was a false breakout. This would put all the longs that bought on the breakout above the congestion area on the wrong side of the trade forcing them to sell and therefore boosting the selling pressure.

Of course it’s easy to see what happens with hindsight, but is there any sense in my thoughts?

Thanks for your email.

Great question! I’m surprised that no-one else has asked. I’m pleased to see that at least one person is critically analysing the articles. Well done.

Your observation is quite valid. The rapid reversal after the breakout is an indication of some supply at that level, and this would have forced the weakest of the longs to exit their position, adding to any bearish pressure.

As price then pulls back to the breakout point, it becomes kind of a tipping point. There are longs in profit from the lows. There are shorts in profit from the post-breakout pullback. Who’s going to get scared out first? It depends largely on the direction of net orderflow from this point. Continuation slightly higher will start to trigger the short stops, propelling price higher (creating the breakout pullback). Continuation slightly lower will start to trigger the long stops, propelling price lower for another test of the lows (and confirming the breakout pullback).

The first was the eventual outcome.

The challenge in answering an email, such as the original Q&A which led to the article, is that it’s asking me to conduct analysis on a market I don’t trade, on a timeframe I don’t trade, and with the benefit of hindsight. I usually caution people to treat any hindsight analysis as potentially suspect (I appear to have failed to do that in this case). While trading live, my decisions are based on my assessment of strength and weakness evident within the bullish and bearish price movement, which allows me to gain a feel for market sentiment, project a likely path for future price action and identify areas of trade opportunity. In conducting hindsight analysis I don’t have the ability to do this. I conducted the hindsight analysis, considering which of the setups I believe I would have taken, given the information that is available. I can’t say for certain that I would have taken a breakout failure entry as you suggest. The strength of the initial push through resistance would concern me. However I can say for certain that I’d be very interested in the breakout pullback entry, after the pullback has stalled & then failed.

Certainly, if I had taken the breakout failure entry, I’d hope that I would have been sufficiently focused to identify the subsequent failure of that move, allowing me to reverse into the breakout pullback.

The reality though is unknown. What would I have done if trading this live? We’ll never know. That time has come & gone.

Let's continue this recent theme… Focus on the areas of the market structure that jump out at you. The sequences that are so obvious, so easy, that you'd be kicking yourself if you missed the trade. Identify them. Study them. Learn from them. And then trade ONLY them… until you've got a proven edge….

I get many emails from people frustrated with the challenges they face in learning to trade. Maybe you can relate to some of these problems: “…I’ve done it again. Another loss held past where I should have exited, hoping for it to come back…” “…It just seems too hard, juggling work, family and trading education….