A swing high is simply a turn point at the top of price action. Price rallies, reaches a top, and then falls. We’ll see a number of examples in the following charts.

How about the swing low? Well, it’s just the opposite. A swing low is simply a turn point at the bottom of price action. Price fell, paused at a low point, and then rallied. Once again we’ll see a number of examples in the following charts.

How exactly do we define a swing high or low? Well, some people like to get very specific. For a swing high they like to see a price bar high, with lower highs on both sides.  Others like to see at least two lower highs to the left and two to the right. And of course the swing low is just the opposite – a low with one or two higher lows on each side.

As you look at the swing highs and lows in the following charts, you’ll observe that each is very clearly a turn point. There’s no doubt. Don’t try to make trading any more complicated than it is.

Ok, the most common use of support or resistance is simply as shown in the following two charts.

Firstly, a group of swing highs at an equal (or approximately equal) price area forms an area of resistance. This is the ceiling that restricts further price rise. 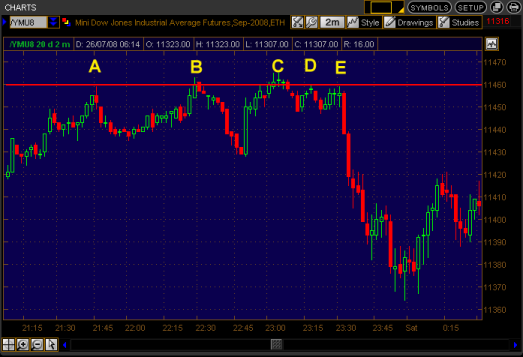 You’ll see in the above chart there’s a clear halting of the bullish move at swing highs A, B, C, D and E.

At each of these points, price rallied to approximately 11460, and was turned down.

Why does price continue to fall at this point? Well, the only reason that price ever falls at a swing high is that the supply / demand balance has tipped in favor of the bears. An increase in supply and/or decrease in demand have led (as it must) to price falling.

How or why does the supply / demand balance change at this point? While there can be numerous reasons, the most obvious reason is that traders simply come to expect it to change. Having reviewed the price action history, the trader will have observed that this price area has previously formed resistance. Knowing that resistance is likely to hold again in future, they will be looking at this area as a setup for a potential short trade. The observation of previous resistance in that area, and expectation of it holding again, leads the trader to add to the supply at this area, increasing the likelihood of the resistance area holding.

How do I use this information? Exactly as described above. In our above chart, let’s say I drew the resistance line after formation of swing highs A and B. Then as price rallied to up to that area again at point C, I’d be anticipating an increased likelihood of the resistance holding again. (NOTE: I’m not expecting any guarantees – the level may break – I’m simply expecting a higher probability of it holding) Then, observing evidence of a stall in upward movement within my setup zone, I’d place a limit order to trade short from as close as possible to the highs. I see two real benefits here:

(a) a higher probability trade – through entry as close as possible to the area of resistance – even if the move only goes a small distance, the aggressive movement of my stop loss to breakeven combined with my scaling out strategy, give the increased likelihood of a profitable trade.

(b) a lower risk trade – through entering as close to the area of resistance as price allows me, I have a reduced distance to the stop loss in the event of a failed resistance level. 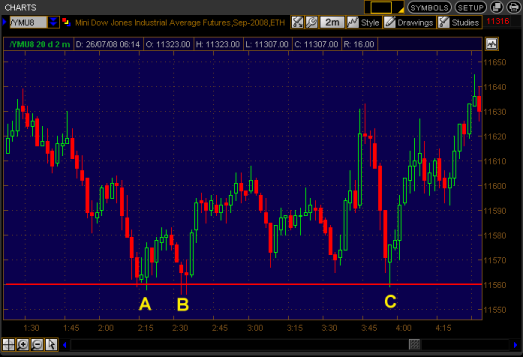 A swing low identifies an area which has previously demonstrated the supply / demand balance tipping in the favor of the buyers.

Having defined an area of potential support through the previous double bottom at swing lows A and B, I know that this offers a potential setup for a long trade if price ever returns to that support level. This occurred at C. In fact this example shows a great setup, in that price has had to already move such a long way down to get to point C.

I will be joining the other traders at point C in looking for an entry point in the long direction, with entry triggering as close to C as possible. While it may have been difficult to get into this trade as price touched the resistance area and then rapidly moved higher, those who managed to get filled were provided with a great higher probability and lower risk trade.

This concept can also be used within the context of an established trend, as shown in the chart below: 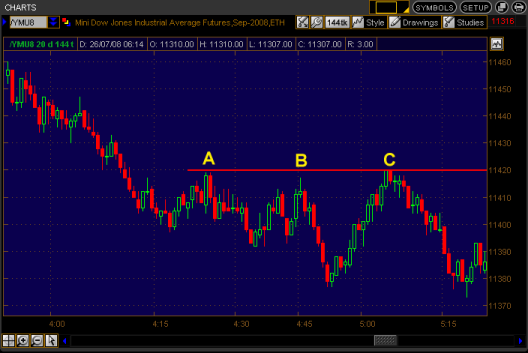 In an established downtrend, I will have observed price forming a swing high and minor resistance at point A. I will expect that if price gets back to this region, that there is a potential setup for a trade short.

Price approached this resistance level with swing highs at both B and C, providing two opportunities for a great trade in the short direction. 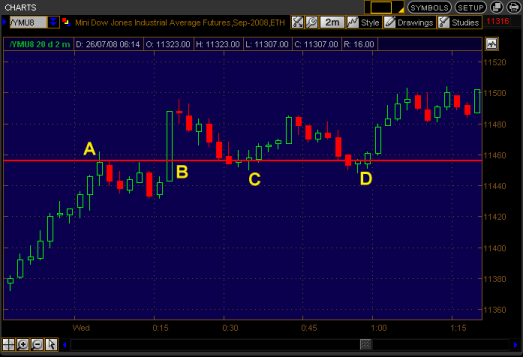 You can see in the above example, that the prior resistance formed by the swing high at A, was broken at point B, and then formed support at swing lows C and D.

Why does this work? Well, apart from the added demand from traders such as myself who expect the support level at swing low C to hold and so look for a setup in the long direction, there is also a psychological reason for this area to hold.

You’ll remember earlier when discussing a resistance level, that many traders expect the level to hold. As price approached point B, some traders would have entered short in anticipation of price halting the rally in the same area as swing high A. While there’s nothing necessarily wrong with that setup, the correct action on a break of the resistance at B is to exit immediately to minimize loss. Unfortunately many traders have a problem with exiting. They won’t exit immediately. Instead they’ll hold their trade, hoping, wishing and praying for price to turn back around and bring them back to profit. As price goes further against them the pain becomes more and more unbearable. Eventually, if it doesn’t turn back they’ll be forced to exit at a massive loss when they just can’t stand the pain any further. In this case though, the wide range bullish candle at B was followed by a doji, which would have provided a little hope. Price then started a slow and painful crawl back towards the entry point. At this stage, our novice trader, trapped in a short trade that’s showing a loss, is simply praying to any and every higher power they can think of to just get price back to their entry point so they can get out at breakeven and not have to explain to their partner why they lost yet another trade.

The trading Gods rewarded our novice traders this time, and gave them an opportunity to get out at point C. And as you’re aware, to exit a short trade requires a buy order, adding to my buy order and those of any other trader anticipating the level of ‘resistance turned to support’ holding.

All these additional buy orders at this level add to demand, leading to the formation of swing low C, and a great setup for a trade in the long direction.

Let’s look at one more example: 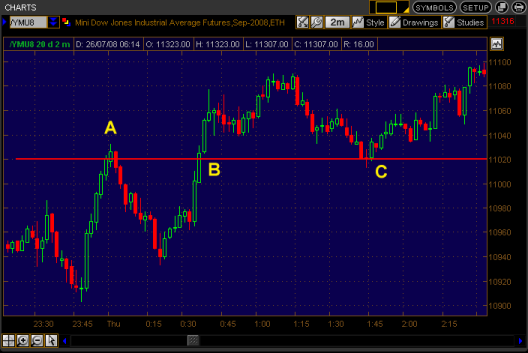 A prior swing high was formed at point A. Some traders who anticipated this area holding again at B would have entered short, and then held their losing trade. The pain of holding a loss leads them to exit at breakeven as soon as price reaches that point again, at area C. Swing high resistance at A has turned to swing low resistance at C, and a great opportunity for a higher probability and lower risk trade in the long direction. 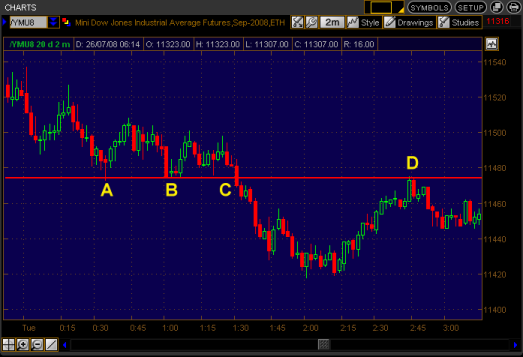 The above chart shows an area of support holding at swing lows A and B. When price returns to that area at C many traders will once again expect that support level to hold, so will enter long.

In this case though, the long move failed quickly leaving these traders sitting on a loss. Price returning to that region at D allowed them the opportunity to relieve the psychological pain and exit at breakeven.

The increased supply through these novice traders exiting for psychological reasons, and through traders such as myself anticipating this ‘support turning to resistance’ leads to D forming a swing high, and a great opportunity for a higher probability and lower risk trade short. 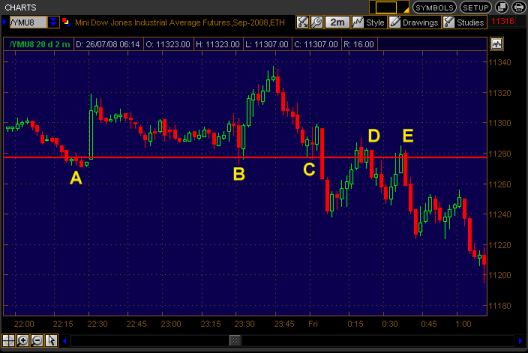 The above chart shows swing lows A and B defining a region of support. When price returns there again at C, anticipation of this support level holding will lead to many traders entering long. There’s nothing wrong with that – it’s a great setup and I’d probably do exactly that myself.

The swing high is formed at D, through increased supply from these novice traders exiting at breakeven, and from traders such as me anticipating this ‘support turning to resistance’.

Those who missed D were provided another opportunity to exit their long trade at breakeven (or enter short) at swing high E.

We’ll continue this series with another article demonstrating how I also use areas of congestion to identify potential zones of support or resistance.

One final point though, for the novice traders out there. Don’t be fooled by the above examples into thinking that your losing trades will always get back to breakeven. They did in these examples, but more often than not the pain will become too unbearable, and you’ll have to exit for a larger than necessary loss well before price ever gets back to breakeven. Unfortunately for those novices who have held a trade and been rewarded with a breakeven opportunity, this simply reinforces their decision not to exit, leaving them more likely to do so again, and therefore one trade closer to a massive wipeout.

Make sure that’s not you. Respect the risk in the markets, and always take your exits.

Are you creating and using your market structure journal yet? If not, why not? (If you're not aware of what that is, why not? It's on my ebook page. See "The Greatest Trading Book – Ever!" at https://www.yourtradingcoach.com/ebooks/) It doesn't matter which market or timeframe you use. Market structure concepts apply to all markets and…

Let’s talk about Market Structure and Price Action study, commencing with a question I received on Thursday – Do you still do daily study of market structure? And my response, sent out via social media: A followup comment from the original questioner… “I’ve tried this in the past but not been able to stick with…

Today’s Q&A is a VERY recent one. It just happened today, but it’s such an important question I thought I just had to add it to the newsletter. Question: Greetings, Lance. I enjoyed and learned a lot from reading your best article: Price Analysis – A Top Down Approach. An experienced trader mentioned to us…