My preference is to trade using time based charts – 30-minute, 5-minute and 1-minute. Largely it’s just due to personal preference. I gain a greater feel for price action through the time based charts, in particular noting the changes of speed through greater movement in a unit of time. Plus there’s also the fact that I believe more people are watching the time charts than tick charts, so I want to see what they’re seeing (if you have data to prove otherwise, please let me know).

However there are some times when I find it greatly beneficial to see a differing view of price action.

Sometimes when I’m just not feeling the bias well I’ll change the view to gain a different perspective. Remember, it is the same underlying price action; you’re just viewing it differently.

The main time though is when price experiences a sudden explosion in volume and volatility, such as occurs following news events or economic releases. In this case I’ll still monitor the time based charts, but they’ll take a second place to either tick charts and/or range charts, which tend to give me greater insight into the forces within the larger-range time-based charts. 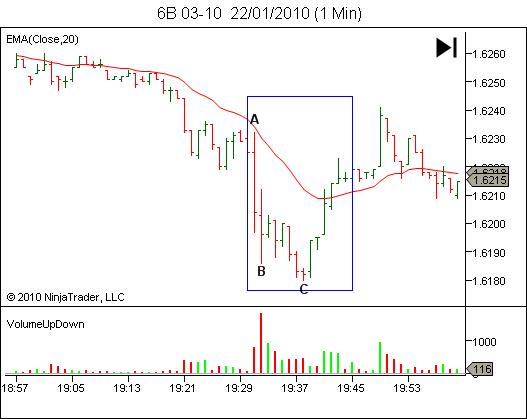 The area marked in a box is reproduced below in a 30-tick chart and a 4-range chart. While they generally follow the 1-minute chart quite well during normal price action, offering little advantage, they excel at these times of increased volatility, clearly showing the shifting forces of supply and demand within the post-economic release period. 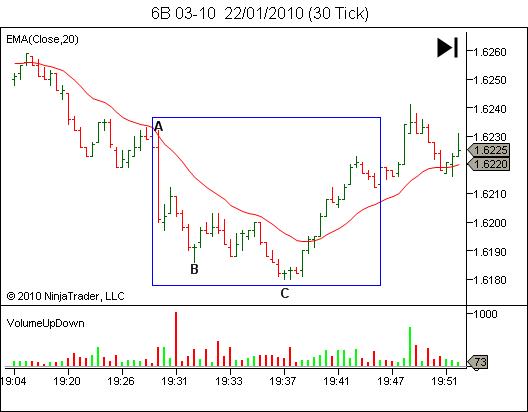 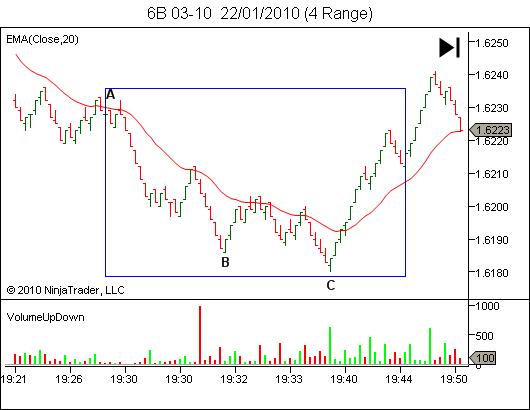 Let’s have a look at the time based chart again and see what trading opportunity it offered.

The Retail Sales figures were released at the open of price bar A leading to an immediate bearish push down to lows at B, although the latter part of the move involved a bit of a tug-of-war between the bulls and the bears (visualize the tails above and below a ‘price-bar B’ candle) which indicates some buying pressure coming in at or below the 1.6200 level to oppose the downward bias.

The following four price bars exist within the range of price bar B, indicating a lack of commitment to the initial bearish thrust.

Point C sets up for a beautiful entry long, when price finally manages to break below the lows of B but can’t hold there; a failed breakout (also kind of a counter-trend Pump Fake, Turtle Soup, Trader Vic’s 2B pattern or whatever other name you want to use).

Certainly in this case the action can be seen on the 1-minute chart, but that’s not always possible when it moves so fast. In any case, you’ll see below with a reproduction of the 30-tick and 4-range charts how they clearly identify the reducing momentum on the subsequent bearish price swings. And the 30-tick nicely shows a four price bar stall just below the breakout point, with the bears unable to push to lower prices.

Entry long as the breakout fails provides a nice rally back to the origin of the post-news supply/demand imbalance, around the 1.6220/25 area. 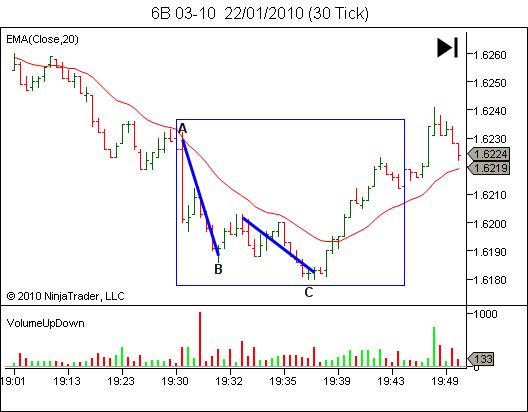 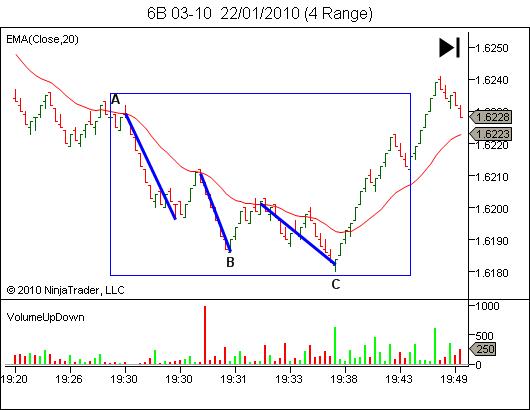 One of the most common email questions I receive at www.YourTradingCoach.com is on the topic of stop running. Sometimes the question comes as a result of the trader having been stopped out on too many occasions by just a tick or two, leaving them to watch from the sidelines while the market then moves in…

A reader recently sent me a question which I think we can all learn from. Let's start with the higher timeframe first to get a bit of context. It's the YM (emini Dow) on the 24th of January 2018, if you wish to look at your own charts. And now let's examine the 1…

I’m always fascinated by the decision making of “other traders”. In particular those who trade in places where I suspect they’ve possibly got it very wrong. Like here… It’s a simple model for decision making, which I find particularly useful. As you watch price you will sometimes find yourself thinking… “WTF! Really! Who would buy…

Pullbacks… a simple retracement structure depicted in textbooks as smooth flowing and simple to read. Reality though, is usually not so kind. Far too often these pullbacks will be a mess. Full of chop, false-starts and stop-outs. Or unexpected and sudden shifts in pace or volatility. Price action seemingly designed to confuse you and…