I received a question from a reader who made an exceptional trade but was concerned that he should have exited the trade much earlier, scratching for a small loss and then possibly seeking re-entry.

I would typically expect most traders to be ecstatic about a win.

But it's a sign of someone much more advanced along the journey, who is more concerned about developing good process than in just celebrating the win.

Here is the trade, along with their question. I've had to shrink the image a bit to fit here.

I'll discuss the question below so it's not essential to be able to read the text. But if you are interested, click on the image and it will open a full-size copy in your browser.

The Trading Timeframe is the 5 minute chart, shown in the small insert to the upper left. The main part of the image shows the 1 minute Lower Timeframe.

But let's take a look through my charts, starting with the 60 minute timeframe for some wider context and then stepping down through both the 5 and 1 minute charts. 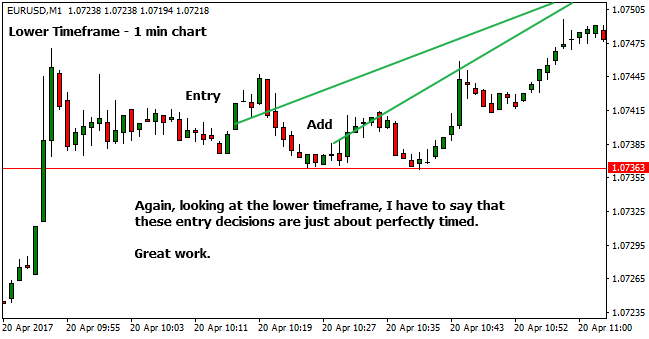 I love it. That is a very nice BPB trade.

But here's the question, courtesy of the trader who we'll just call M.I. 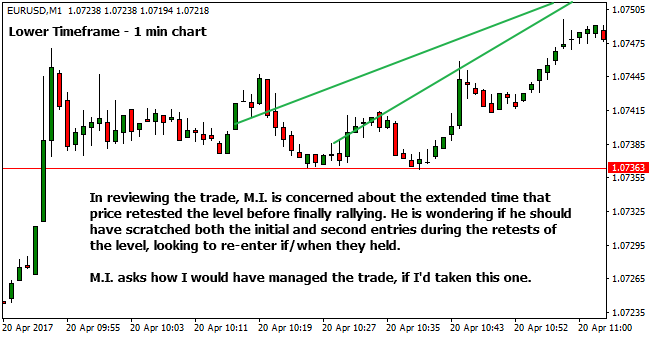 M.I. is correct in his understanding of my style of trading. Over the years I've developed a preference for active management of my positions, in particular around the entry point. My preference is to not just hold and HOPE. But rather to be taking off risk if I feel the position is threatened. And re-entering if the trade premise does remain intact.

It's always impossible to say exactly how I would have traded something live, when I wasn't actually there to experience the price action. Hindsight knowledge of the outcome DOES alter the way we believe we would have traded.

So taking this with a grain of salt, here is what I "believe" I would have done: 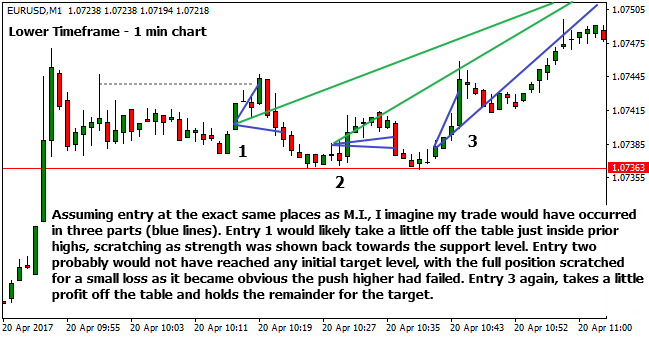 Here is the thing though – IT DOESN'T MATTER.

There is no right or wrong method of trade management.

Either way is fine – completely passive set and forget, or quite active like I prefer. Or in fact anything in-between.

What is important is finding and developing your own style and then using that consistently.

Find what fits your personality. And just be consistent.

Here is the IMPORTANT THING TO REMEMBER, regardless of which style you choose:

We both have the same area at which we deem the trade invalid. 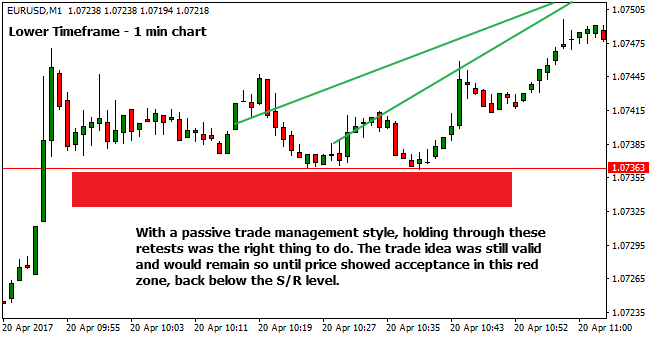 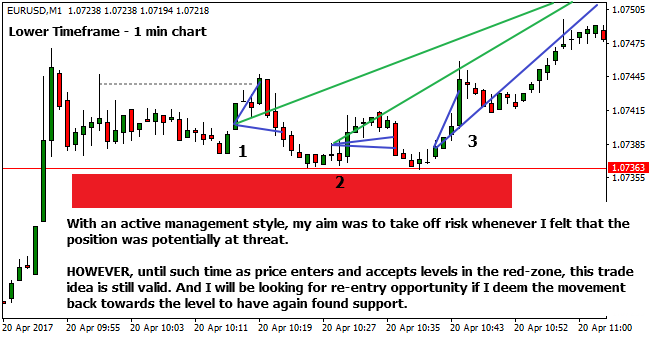 Either way is fine. Find what best fits your personality and just be consistent. Active, passive, or any blend in-between.

Your style will likely develop over time, regardless of which you start with. Track your results. And work to improve.

Even better, if you can afford the time, track both methods and compare the results over time.

Most likely though, personality will play a greater part in the ultimate style, rather than which offers the greater profitability.

A little tip though, if you're unsure where to start. Look at the worst case for each scenario and see which offers the maximum regret. Then avoid that option.

Passive management – the worst case scenario is when the trade does fail and you could clearly see that it had lost it's edge, having tons of time to scratch the trade for a small profit or small loss, but instead hold the trade for a full-size loss just because someone told you "that's how you're meant to do it!".

Active management – the worst case scenario is when the trade idea works, but you've scratched the position for a small profit or small loss, and then can't find any way back in, watching the market move to your original targets without you.

Visualise placing a trade. And then work through both scenarios. Which feels the worst? Now, avoid that method and start with the other.

For me, I'm quite comfortable missing a trade. I'm happy to let it go. It wasn't mine to catch. And I'll just move on to the next.

But holding a position for a loss, when I could see it coming well ahead of time. That's just stupid (IMHO).

But it's not the only way. And it's not necessarily the right option for you.

M.I., you chose a passive style of management for this trade. And it was a GREAT TRADE. Perhaps that is the style that suits your personality the most at this stage of your development? If so, don't worry about how I would have traded the position. Take notes on your trade. Keep your stats. And continue to monitor and grow over time, allowing your trade management style to naturally evolve over time.

In recent months we looked at a number of metagame examples – trading at places where the "the other trader" feels extreme stress or fear. You'll find some of these articles, if you missed them, here, here and here. Today, I thought we could look at another one. Because I just LOVE these setups….

The Metagame: Viewing the market not just as price movement and patterns, but also as PEOPLE whose trade decisions create the price movement and patterns. Metagame Trap Entry: Recognising places on the chart where other traders are trapped in losing positions. Feeling their frustration, pain and disappointment. And using that to time our entry, at…

Last week’s article led to a simple question from a reader – “I’m not familiar with the Inside Continuation pattern. Do you have a post where it’s discussed?” No blog post, sorry. So let’s create one now. The prior article was this one: Project – Confirm – Trade And the reference to the term Inside…