International football (soccer) is one of the few things that I will allow to interrupt my trading.

I have no idea why I would encourage such masochistic behaviour. Following Australia in the international arena is more often than not a frustrating and disappointing way to spend my time.

But it is what it is.

And so on Tuesday, with a World Cup qualifier kicking off shortly after the market open, I planned to watch the first half and then reassess.

Half time report – 1-nil – not a great lead but we’re in front and controlling much of the game.

So let’s trade, with the remainder of the game streaming beside me. Poor practice, but a classic example of “Do what I say, not what I do”! 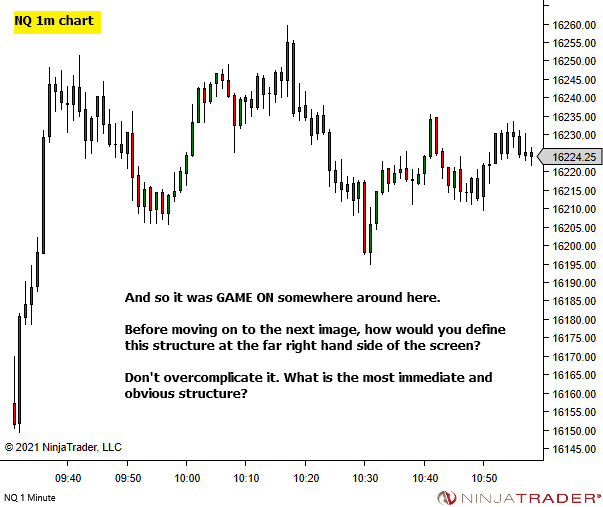 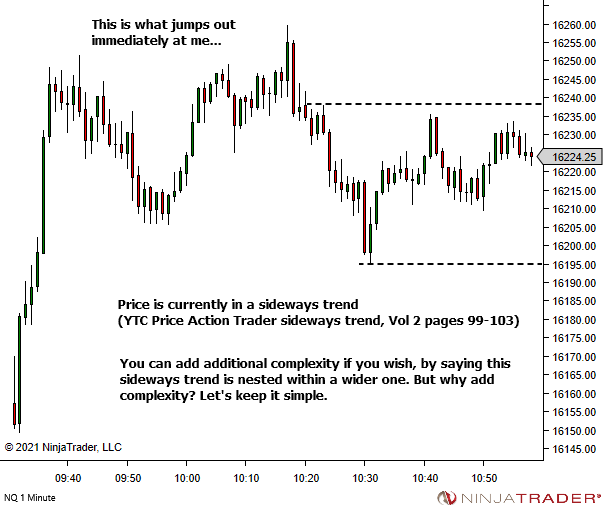 This puts us in the situation discussed a few times in the past. Trading AFTER structure has formed.

The disadvantage for me is minor. I simply miss the market open which is my favourite time of the day.

The advantage, as discussed in the prior articles, is that much of the opening uncertainty will have resolved itself. You now have clear structure in place. And a clear and obvious plan. 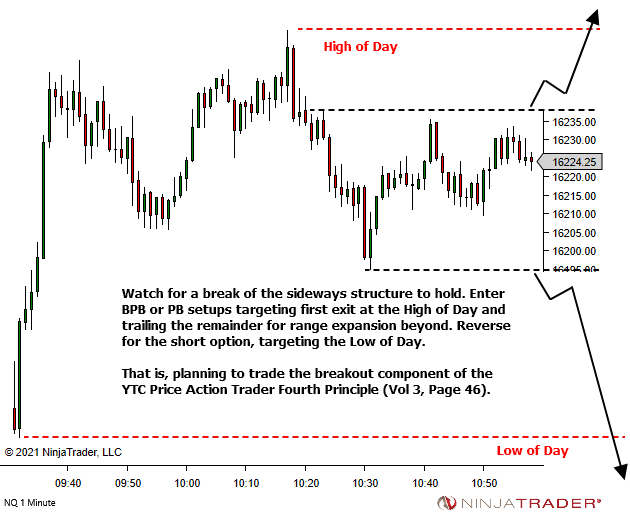 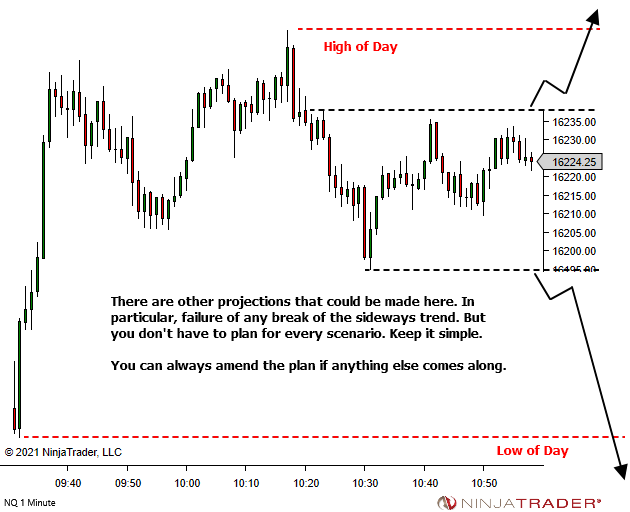 We’ve avoided the uncertainty of the open.

The structure is clear.

And we have a simple plan.

Now, it’s just a matter of letting the data unfold bar-by-bar. Trading if our projection sets up correctly. Or amending the picture if something else forms. 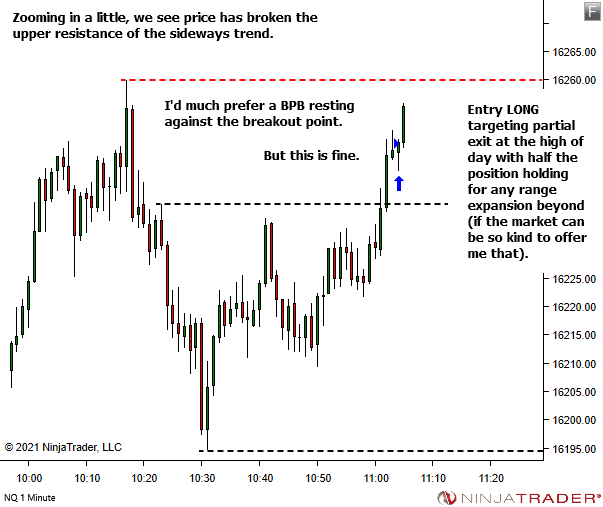 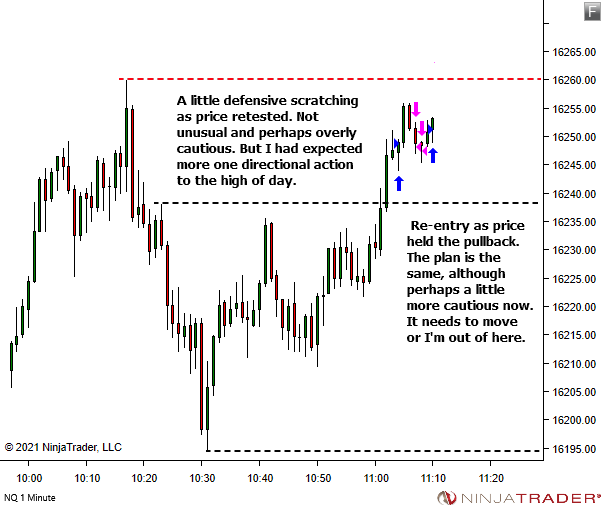 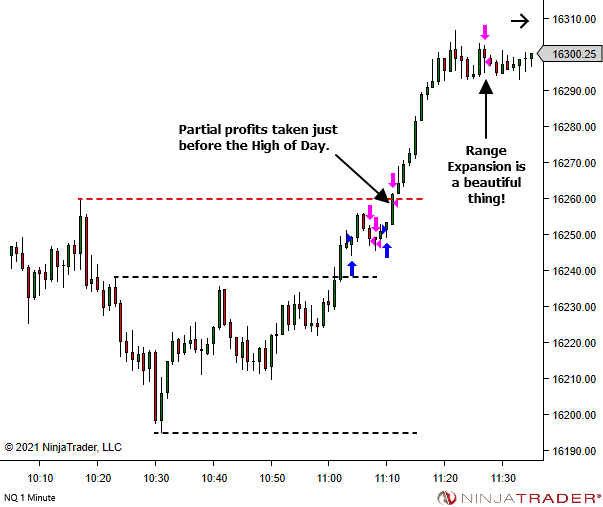 I’d thought about calling this article “Targeting the High of Day (or Low of Day)” with the message being that these can be great trades because of the real potential for range expansion.

But I think a far more important message comes from the series of “Trading after Structure has Formed” articles.

Because I suspect most traders are not suited to the uncertainty of the action at market open.

And so it’s ok to delay the start of your session.

Trade on your terms. Not the markets terms. Just because the market opens at 9:30am (or whenever yours opens) it does not mean you have to trade from that time.

Check your stats. If you underperform at the open, delay your start.

Let some opening structure form first. Perhaps the first TTF swing. Or perhaps a fixed period of time (5m, 15m, 30m, or even the opening hour).

And THEN trade. Once the structure has formed. And once the plan becomes clear and obvious.

The Australian football team provides enough frustration for one life (full time 1-1). Don’t make your trading any harder than it needs to be.

PS. References for the Sideways Trend definition and the Fourth Principle – See Here

I received an email during the last week seeking some clarification about a prior series of articles. I thought it best that I share this with you all, as my experience shows that if I’ve failed to adequately explain a concept to one person then there are likely many others who didn’t get the message…

Let's start with the daily chart for a bit of context… I know right! When was the last time we looked at a daily chart? No need to panic. Oxygen masks have not dropped from the ceiling. And we'll only spend a short time at these heights. You know those days where you've got…

Some more great email Q&A… Question: Hi Lance, Had a question on breakouts. I know you subscribe to the breakout, then wait for a pullback to get in. I was monitoring GBP/USD last night. I set an alarm for if price got up to resistance at 1.5080. It then broke thru. Sticking to my rules…

Last week we examined an early-session opportunity in the Australian SPI futures market. See here if you missed the article: https://yourtradingcoach.com/trading-process-and-strategy/late-session-breakout-early-session-opportunity/ Over the weekend I received an email from a reader asking an excellent question. I thought I should share it with you all. Question: Hi Lance, You mentioned that there were 2 opportunities…