The following YTC Social Media post was just about a perfect example of the concept of trading failed expectations. 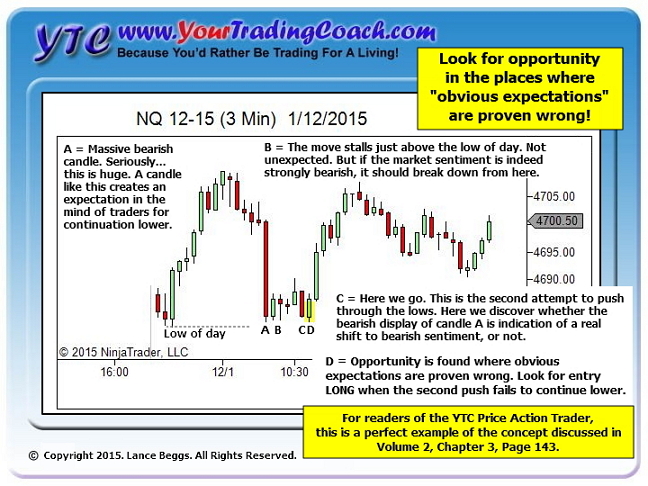 I received a question on the facebook post about trade entry. So let's look at the trade I took in this area – a test of Low-of-Day support.

The 3 minute chart was used for the facebook and twitter post, simply because it beautifully demonstrated the concept that I was trying to highlight. It wasn't about my trade or my timeframes. It was about the general concept of looking for opportunity in places where "obvious expectations" are proven wrong.

The same idea applies on the 1 minute chart, of course. And it's the reason underlying my trade.

But this time… it's a WHOLE LOT MESSIER!

The good trades move quickly to the targets. But we don't always get good trades. And there's not much to learn from them. The messy trades though… much more common and much better for "lessons".

Here's the same test of Low-of-Day support in the one minute chart: 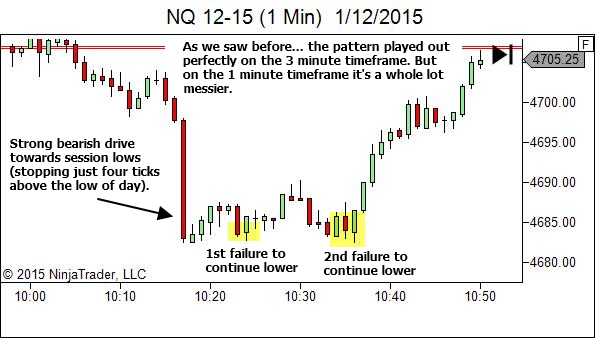 The strong drive towards the support level appears as before, creating an expectation in the mind of many market participants for continuation lower. Personally, I expect that as well (YTC PAT Sixth Principle). And my plan is to wait for the break and assess the likelihood of either breakout failure or breakout pullback potential.

But when a move this strong stalls… and breaks back above the next TTF candle… well this is NOT what would be expected of a "strong" bearish market.

Let's wait and see what happens on a retest. If the retest continues with strength, I'm back with the original plan (watching for breakout failure or breakout pullback potential). But if the retest cannot continue lower… well I just love these setups. They can snap back higher quickly. So I'll be looking to enter LONG on a test of the support level, based upon the fact that the market has shown it can't go lower and the prior bearish strength was an illusion (liquidity vacuum perhaps!).

The market sets up that scenario nicely, as we see in the above image with the first failure to continue lower. Look for lower timeframe entry in the shaded region.

In this case though, there is no quick movement higher. And the market falls for a second attempt to break support.

This provides a second opportunity to get long, as the market is once again unable to continue lower. But it's quite a messy one with some chop at the turning point.

This is the reality of the markets. We all want trades that move quickly to their target. But that's not what we always get. You need to decide how you will deal with these "messy" setups. Some people prefer wider stops, to allow for chop and imperfect decision making at the entry zone, willing to accept the reduction in R:R potential. Others, like me, prefer to keep the stops tighter. But to be effective in that regard you need to be willing to scratch and re-enter. Don't let an initial failure prevent you from trading the second chance entry.

My entry is triggered on the lower timeframe charts (a combination of 15 second and YTC Scalper 2-Range). But for the sake of this article I'm going to show the 30 second chart, which displays all the information you need to see while also fitting nicely on the one image. So let's check it out. 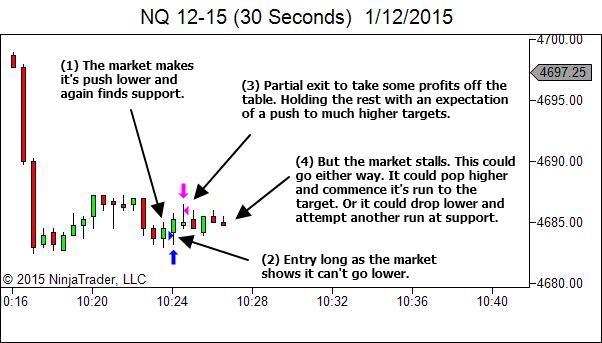 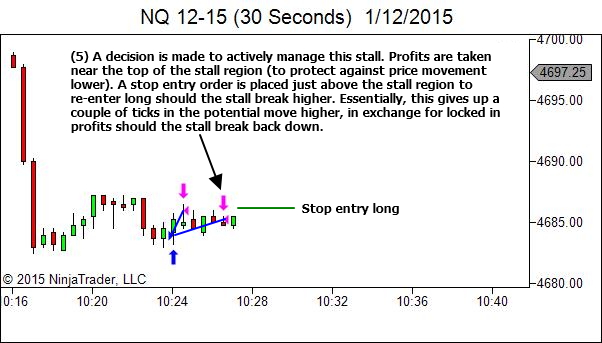 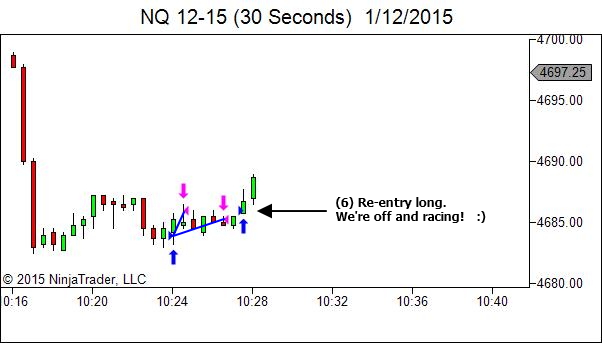 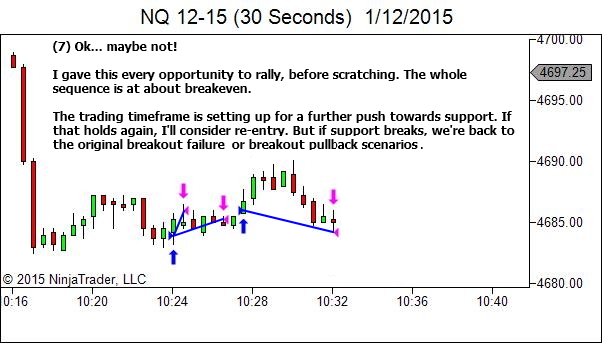 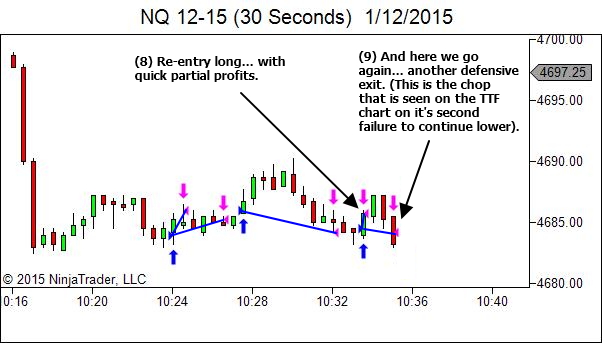 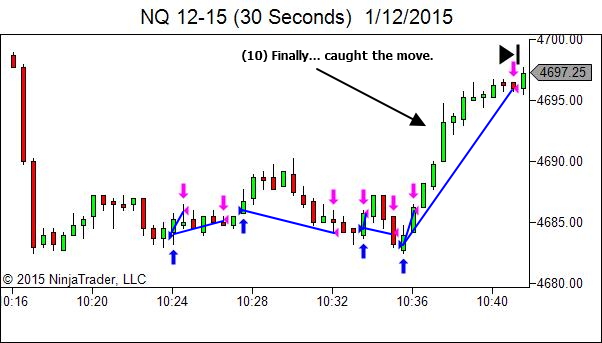 1. Entry long is taken when the market shows it can't move lower. There is no more confirmation required than this.

2. While we all love trades which move straight to the target, they don't all work out that way. You need to expect messy trades. How you manage messy trades, is completely up to you. Your style will develop over time. You don't have to do it like I do. You may prefer a wider stop and then just stand aside letting the market work it's way to either the stop or target. There's no right or wrong. Whatever works for you, provided it leads to profits over the long-term, is fine.

3. Defensive exits though… provided they come with the confidence to get back in… can help limit loss. Look at the first part of the sequence from entry to flat. Had the market dropped lower from that stall region, breaking through the low of day support, I'd be taking a small profit from the trade whereas a passive stop-or-target approach would provide a loss. Again, there is no right or wrong. Whatever works for you, provided it leads to profits over the long-term, is fine.

(a) LOOK FOR TRADE OPPORTUNITY AT THE PLACES WHERE "OBVIOUS EXPECTATIONS" ARE PROVEN WRONG.

(b) EXPECT MESSY TRADES. THEY ARE PART OF THE GAME.

I'm displaying charts without any trade markers here, so that you can focus on the price action without any distraction. Because there is a very important fact that not everyone gets. And rarely is it displayed in such a simple and obvious manner, as it is with the two charts we'll discuss today. That…

An excerpt from a reader email: How should one trade when the market opens? I have found that it's somewhat a guessing game which way the market will trend during the first 10 mins as it sometimes gaps down & then reverses & trends up for the rest of the day. Do you avoid the…

A term you'll hear me use occasionally is "trading the edges". What I'm referring to here is: In a sideways market with no particular bias either direction, taking trades only in the vicinity of the outer edges of the trading range; in particular when it traps a "breakout" trader. Trades may be taken long from…