Trapped traders are a simple concept you may wish to incorporate into your trading strategy, due to its potential to offer higher reliability trade setups.

These are price action based setups in which traders suddenly find themselves trapped in an undesirable situation, either:

The key in both cases is that the price action has placed traders in a position where their normal human emotional response will compel them to make a trade. We can then increase our odds by trading in the same direction as this new surge of order flow.

There are numerous ways this can present itself on a chart. We’ll look at one of my favorites today, and follow up with other trapped trader patterns in future articles.

You might also hear it referred to as an ABC correction, or an ABCD correction. It could also be considered in some cases a bull or bear flag.

We’ll start by examining a 3-swing retrace in an uptrend. 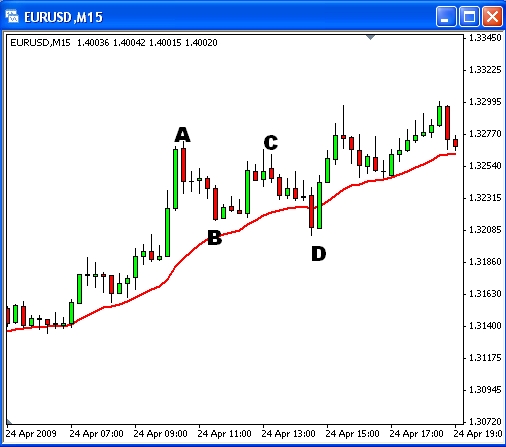 The 3 swings in the name refer to price swing AB, followed by BC and CD.

The price action is quite simple. An uptrend leading to:

The moving average is not essential – it’s just there to make it simpler to see the clear uptrend. And because you’re sure to be wondering, it’s a 20 period EMA. Nothing special about that, although it is a commonly used moving average. Anyway, back to the 3-swing retrace…

Why is this 3-swing retrace a powerful setup? Let’s consider the thought processes of two quite normal traders, trader A and trader B.

Trader A has been watching the uptrend rally from the sidelines, frustrated that he’s missed the move, and desperately seeking any sign of a reversal so he can get on board the next trend early. He’s not going to miss this next trade.  Hope comes when he sees the price unable to breach the highs of pivot A, forming the lower high of pivot C. Trader A knows that the definition of an uptrend is a sequence of higher highs and higher lows, so the lower high is a warning sign of possible trend failure which will be confirmed by a break of the pivot low at B. He places an entry order to initiate a short position on a break of B, as is rewarded as a large red candle triggers his entry.

This is quite common thinking. Many traders will see this breakout as a quite reasonable entry point in the short direction. Others will wait for further confirmation such as a close below the pivot low at B, entering at an even worse price. The strong close below the EMA 20 is another bearish sign which should attract other traders seeking an early entry to a reversal.

In this case, the bearish order flow of the reversal traders was insufficient to overcome the force of the uptrend. Price immediately turned and smashed them, via a large green candle closing well above the pivot B breakout entry point and also above the entire red breakout candle.

No-one likes the pain of failure, especially when it comes so rapidly and decisively.

Stops will be triggered, in some cases above the red breakout candle which led to pivot D, or in other cases above the high of pivots C or A. These stop orders, which are a BUY, add to the uptrend bullish order flow, helping to propel price to new highs.

Now let’s consider Trader B. Trader B was lucky enough to catch the original trend and is sitting on a profitable long position. However, as is quite common, Trader B finds it difficult to let profits run. Recognizing the lower high at pivot C, and therefore the potential trend failure, she tightens up the trailing stop to a breakout of the last swing low, pivot B. Stopped out of her position as the red candle moved down to D she feels quite happy with herself and her brilliant tape-reading skills, until the next green candle reaffirms the dominance of the bulls and continues the uptrend without her.

Knowing that she was unfairly stopped out by those damn stop-running brokers who once again were obviously targeting her position, she now scrambles to reenter her position long, either on the close of the green candle, or the breakout above pivots C or A.

Once again, the reentry order, which is a BUY, adds to the bullish order flow helping to propel price to new highs.

Where is our entry?

As soon as we can after the large bullish green candle traps our friends Trader A and B.

Our stop loss of course should be below the pivot D, as price returning to new lows would confirm the failure of our 3-swing retrace setup.  Yes, sometimes the trappers can get trapped!!!

Let’s look quickly at a second example, this time in a downtrend. 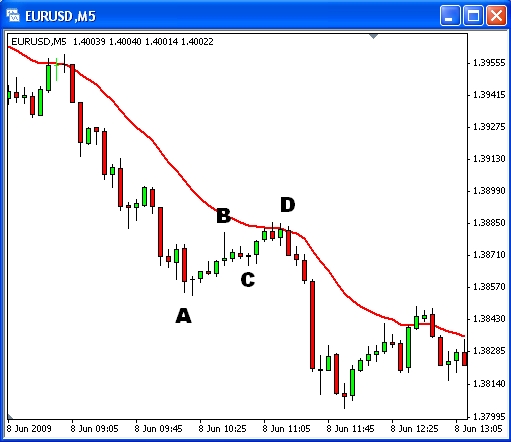 This example is not as technically beautiful as the previous one, but then price action patterns are rarely text-book perfect. If you look at the positioning of the labels A to D, you’ll clearly see the 3-swing retracement pattern. In this case we have a downtrend leading to…

The candle at pivot B offered an excellent rejection of higher prices, perhaps tempting many of the traders in a short position to tighten their stops above this candle. These positions were of course stopped out on the run up to D, trapping the bears out of their position as it then resumed its downward move.

Likewise, anyone entering long on the break above pivot B suffered through a 3 candle pause before being trapped in a drawdown situation.

Both groups of traders, those trapped in a losing long position and those trapped out of a profitable short position, will now contribute to the bearish order flow through their sell orders, as price plummets from pivot D.

Till then, watch out for these patterns when the market is trending.  Awareness of these setups can be difficult in real-time as it is quite common for traders to be searching for reversals. It’s important to remember though that trends will often continue a lot further than you can possibly expect. So don’t be too quick to change your bias. Watch counter-trend setups for possible failure opportunities, which often give a great entry back in the original trend direction.

Let’s start with the daily chart at the time of market open. Because it shows structure that has me VERY interested in trading to the LONG side. Let’s drop to the 1 minute trading timeframe chart, just three minutes after the open. Happy trading, Lance Beggs

Do you remember the feeling of excitement when you first discovered candlestick patterns? Simple textbook patterns which promised to get you into every market reversal, right near the beginning of the move. If you’re like most of us traders, you bought a book on candlestick patterns, or scoured the internet for the best of the…

I had no plans to continue the recent article series but the market had different ideas, so here we are! First, if you missed the prior articles then see here – https://yourtradingcoach.com/trading-process-and-strategy/traps-just-before-rth-open/ And here – https://yourtradingcoach.com/trading-process-and-strategy/traps-at-the-open/ And that brings us to today's sequence… We'll start with a quick look at the prior day and…

When discussing climactic reversals with newer traders, I find the most common question is where to enter. After all, it can feel very much like the commonly quoted statements of ‘jumping in front of a train’ or ‘trying to catch a falling knife’. Yesterday, (Thurs Feb 18, 2010) gave us a nice simple example, so…

Did you know that there is a whole ‘other world’ of technical analysis that most novice traders are either totally ignorant of, or fear to go due to the fact that it might actually require some work? Well, there is! And I’d suggest that if most novices fear to go there, then perhaps it might…