Trapped traders are a simple concept you may wish to incorporate into your trading strategy, due to its potential to offer higher reliability trade setups.

Part 1 of this series introduced the 3-Swing Retrace. If you missed that article, you’ll find a copy at this address: https://yourtradingcoach.com/trading-process-and-strategy/trapped-traders-part-1/

In this article, we’ll look at setups which are often referred to as Springs and Upthrusts.

As with the 3-Swing Retrace, Springs and Upthrusts are price action based setups in which traders suddenly find themselves trapped in an undesirable situation, either:

In both cases the price action has placed traders in a position where their normal human emotional response will compel them to make a trade. We can then increase our odds by trading in the same direction as this new surge of order flow.

Let’s start by examining an Upthrust.

An Upthrust is a price breakout through resistance, which is rapidly rejected. Ideally this occurs on the breakout candle, or the very next candle, trapping breakout traders long, and trapping out those bears who had positioned themselves short during the consolidation at resistance. An example might help… 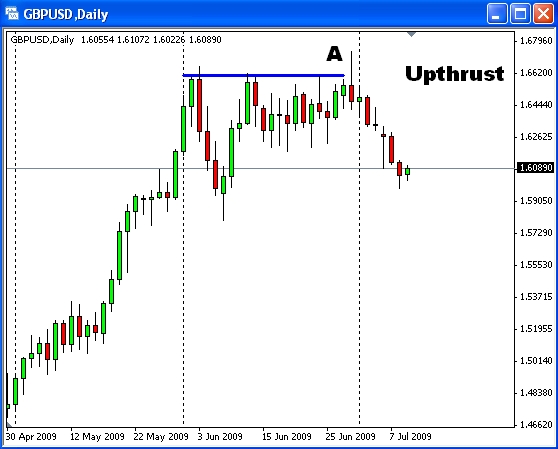 This first chart is the GBP/USD daily chart, showing a rally throughout May 2009 up to highs in the vicinity of 1.6600. The price action throughout June continued to find resistance at that point, until June 30th, when the candle just to the right of label A broke through to new highs.

However you’ll see that the breakout candle failed to close above the point of resistance, instead rejecting higher prices and collapsing lower to form a nice topping tail.

Breakout traders who entered on the price break above resistance would now be trapped in a losing trade. Some will exit immediately, while others may just tighten their stop. Regardless of when they exit though, their exit order (a Sell Order) will add to the bearish order flow helping to propel price downwards.

And many of the bears, who entered short close to the resistance in anticipation of a reversal, would have been stopped out on the Upthrust through resistance. We know that’s a fact, because traders almost always place their stops just beyond support or resistance. These traders are now trapped out of their trade, which is continuing to support their bearish view. Some will reenter immediately. Others will be a little gun-shy, having just incurred a loss, and so will wait for further confirmation before entering short. Either way, if they do reenter short, their entry order again adds to bearish order flow helping to propel price lower.

Recognizing the failed breakout (Upthrust), we will be looking for an opportunity to enter short, aligning ourselves with the increased order flow from the trapped traders. 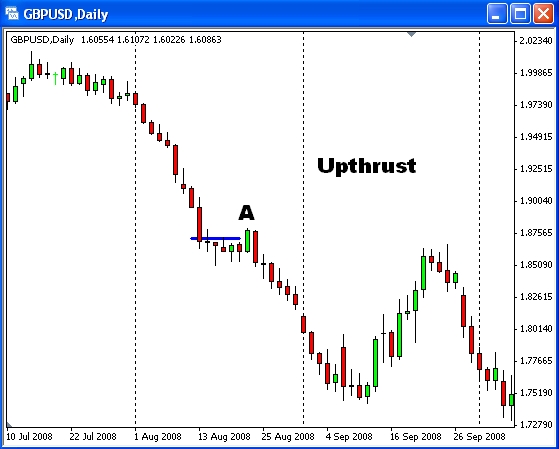 Often you’ll see definitions for an Upthrust which only relate to a reversal of an uptrend. That is, a breakout of the distribution pattern at the top of an uptrend, which then reverses and heads down. If you want to just stick with that definition, then by all means do so. I prefer to also trade Upthrusts as a continuation pattern within a trending environment.

In this second chart, also GBP/USD daily, you’ll see green candle A breakout above the short term resistance, indicated by the horizontal line. The subsequent candle smashes the hopes of the breakout traders, rapidly trapping them in a losing position. The sell orders as they exit will help propel our short trade to lower prices. 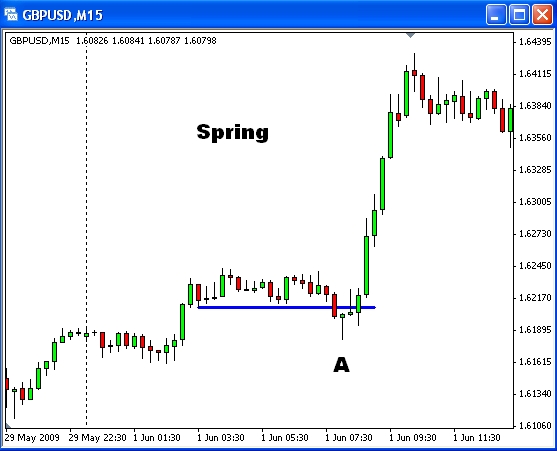 On this GBP/USD 15 minute chart, we see an uptrend consolidating above support marked by the horizontal blue line. At the opening of the Euro session (which by the way can be great for these setups), we see price breaking support at A before reversing to then move in the opposite direction.

The Spring pattern traps any bearish breakout traders in a losing trade. It also traps the bulls out of their long trade, if they tightened their stop up below the consolidation.

The initial move following A was a stressful moment for both the bulls and bears, as price stalled within the original range for two candles. However it then exploded higher, with the move propelled by order flow which included the failed breakout traders exiting for a loss, and the trapped out longs reentering their original direction.

One more example… let’s make it a loser though, for a change. 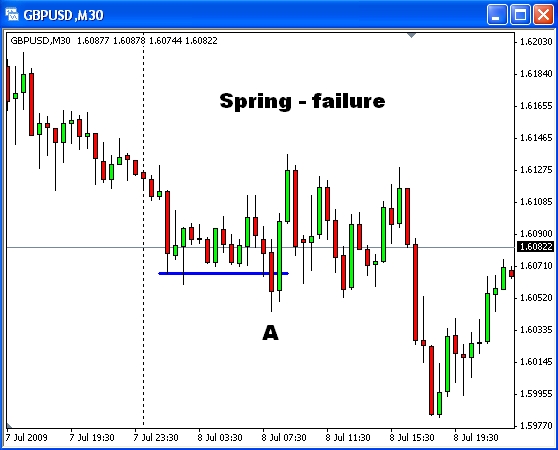 In this example, we have a GBP/USD 30 minute chart, in which price broke below support at point A, only to have that move rapidly and convincingly rejected. As we now know, this move traps the bears in a losing trade, and traps out many who went long in the consolidation, expecting a reversal.

Price failed to follow through in this case, unable to overcome the bearish order flow from the downtrend, leading to a wider period of consolidation before continuing lower.

A failed failure pattern can be an excellent entry back in the original direction, if it happens quickly. In this case the post-failure price action was choppy and messy, so my preference would be to exit and wait for the next opportunity. In this example, a breakeven exit would have been easily achievable. That of course won’t always be the case.  The important point is that although we have identified a price setup which can contain an edge, not every trade will work. Especially when trading a reversal against the prevailing trend, always plan for failure through appropriate stop placement and trade management.

Till then, watch out for these patterns, in particular when the market is trending.  As always, awareness of these setups can be difficult in real-time, but will improve with experience. It’s important to be not too quick to change your bias. When a breakout occurs against your bias, watch carefully for a failure of that breakout for a great entry opportunity back in your original direction.

There is market opportunity available when "obvious" expectations turn out to be WRONG. You've no doubt experienced this. Those times when the market provides almost certain evidence that it IS going somewhere… but then it doesn't. I can promise you – if you sense these "obvious" expectations then you're not the only one. Others…

I've become rather fond of targeting either the overnight high (ONH) or overnight low (ONL) during early session trading. If you're new to this idea, schedule some time to look back at the last few weeks of charts and take note of how many times they hit. For the ten sessions leading up to…

The charts should be pretty self-explanatory, so have a read through them and then I’ll wrap it up with some text following the last chart.

Wednesday’s price action (3 Nov 2010) in the GBP/USD provided a good reminder of the importance of being aware of the key market structure and timeframe influences that exist in our markets. In forex, one of the most obvious features is the typically narrow range Asian Session. (See here for a related article on the…