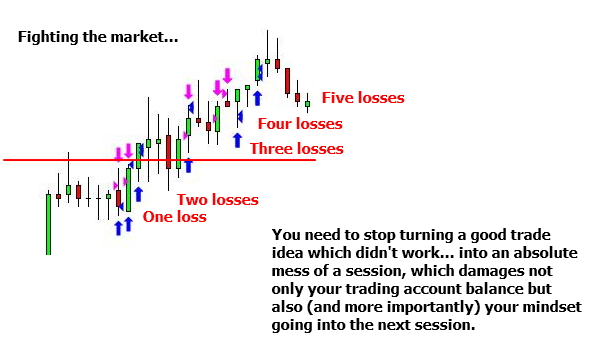 You need to break the pattern.

After two attempts at a trade idea, if it hasn't worked, it's clear that something is not right. You're not in sync with the market.

Try also to see the picture from the perspective of someone who might have the opposite bias to you. What are they seeing? Could they be right?

But you may also have prevented a meltdown; stopping a good trade idea which didn't work from turning into an absolute mess of a session.

Here's a recent trade sequence where I implemented this rule – Two Attempts – Then Reassess! 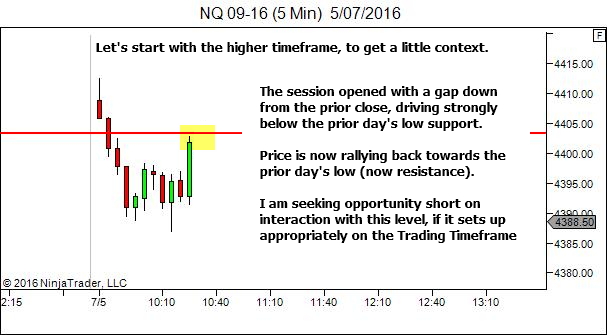 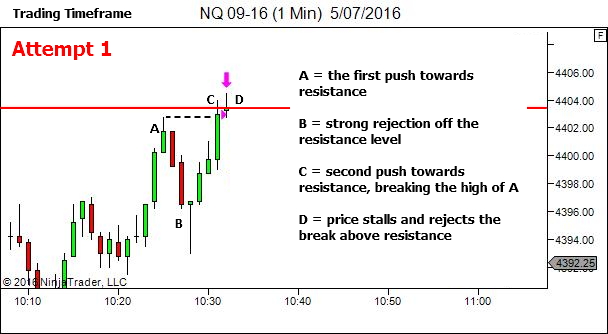 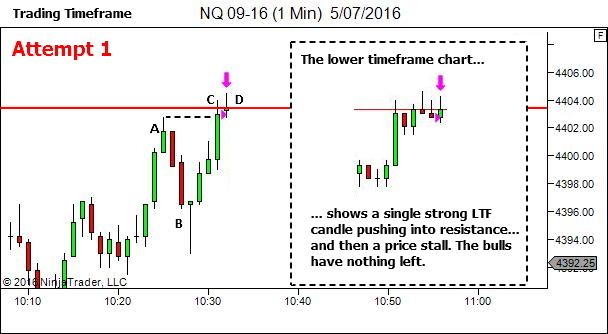 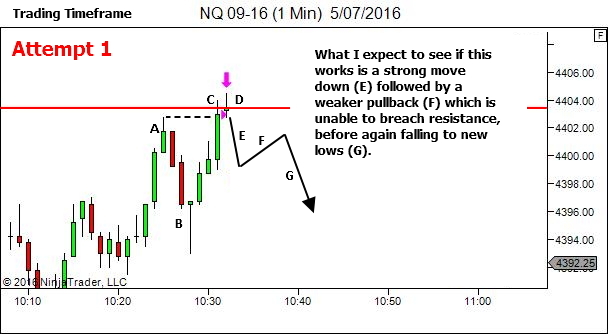 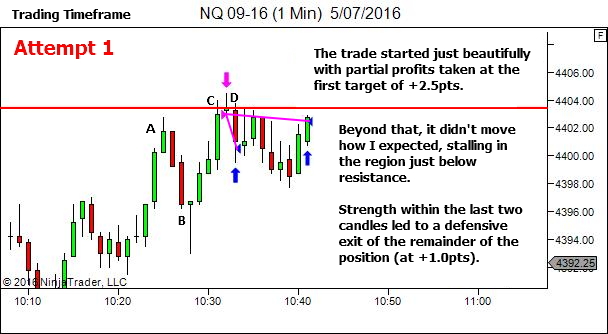 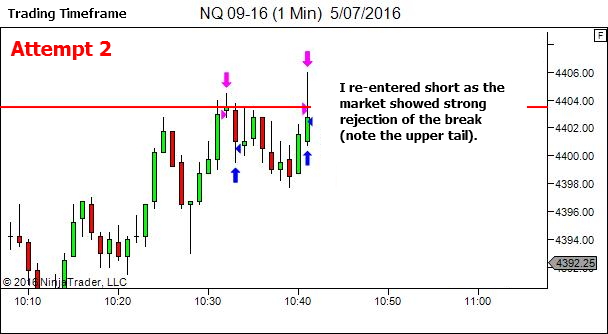 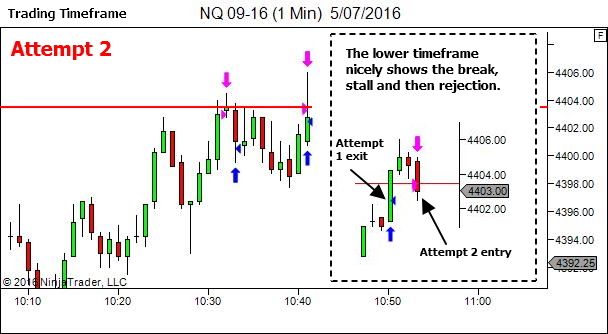 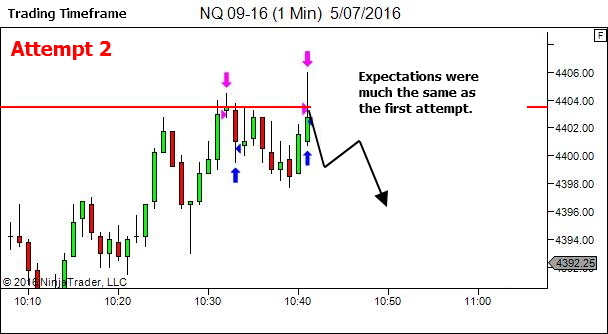 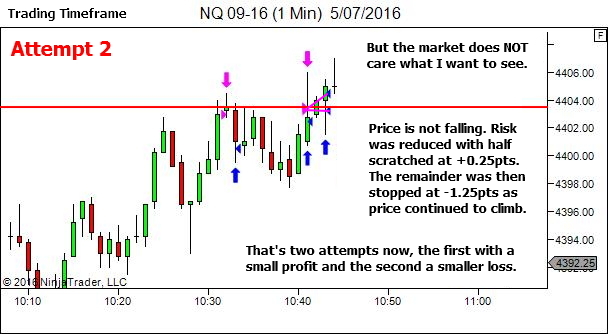 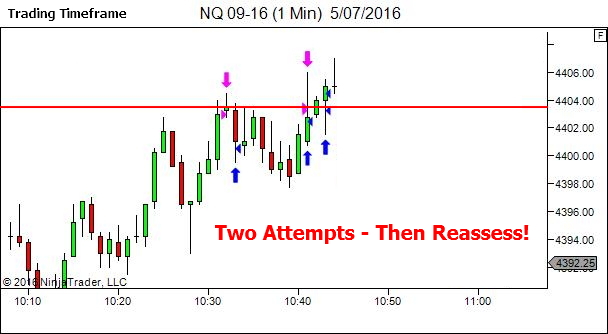 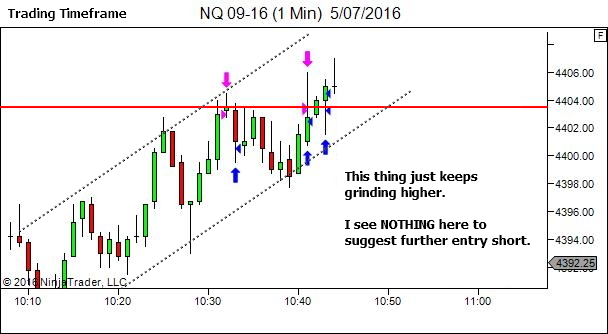 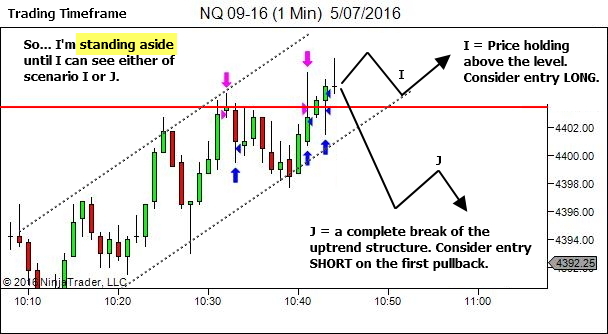 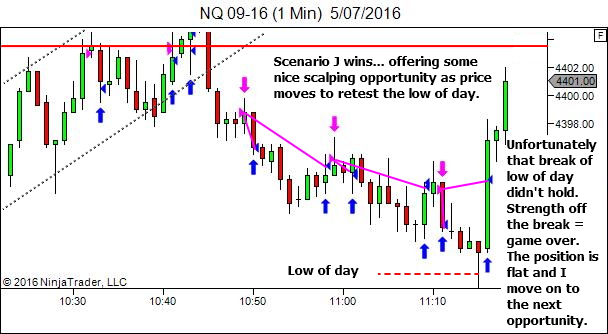 Two trades were attempted, based upon the idea that the prior day's low resistance level would hold.

While the net result of both was a small profit, rather than loss, the fact remains that I was out of sync with the market.

Either my trade idea was wrong, or my timing was out.

Hindsight proves that this time it was a timing issue. The level did eventually hold. But only after providing some nasty chop around the area.

Regardless of this, the right action was to reassess; STANDING ASIDE until something clearer and easier revealed itself.

You don't have to trade all price sequences. If something is not working, get out of there. Survive to trade later in that session, or even the next day, when your read of the market is more in sync with reality.

Don't let a good trade idea which didn't work, turn into an absolute mess of a session.

Recently I posted the following image to my YTC Facebook page:     Let’s look at this Opening Range (OR) idea in a little more detail.

The best entries lean against some recent structure which limits movement against the position and provides a logical place for the stop. Unfortunately though, the market cares little for what we want to see in an entry. So how do we get in when there is no recent structure and we're trying to time…

When I identify a setup area based upon the structure of the market, one thing I absolutely love to see is a double failure pattern. The double failure pattern was discussed in a prior article (https://yourtradingcoach.com/trading-process-and-strategy/the-double-failure-pattern/) and involves two failed attempts to breach a significant structural area of the chart. Entry is on the failure…