For something different, let’s look at two trades sent in by a reader who is trading the YTC Price Action Trader strategy.

Because there is one aspect of their email that I ABSOLUTELY LOVE. More on that later. First, the email I received on Monday…

I just wanted to share two beautiful BPB opportunities that were offered this week.

They played out in a very similar way. Both of them offered a quick entry best visible on the LTF, and then later opportunity on the next PB.

On Wednesday, I was able to catch the move from the beginning.

On Friday, I could see it developing and attempted to enter but unfortunately couldn´t get a fill. I then entered on the next PB available and was able to catch at least a part of the move.

And the trades (click on the images to open full-size copies in your browser). 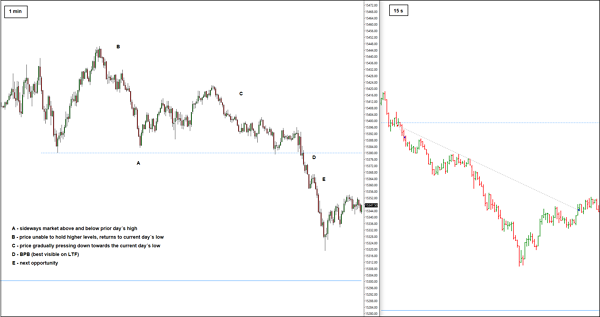 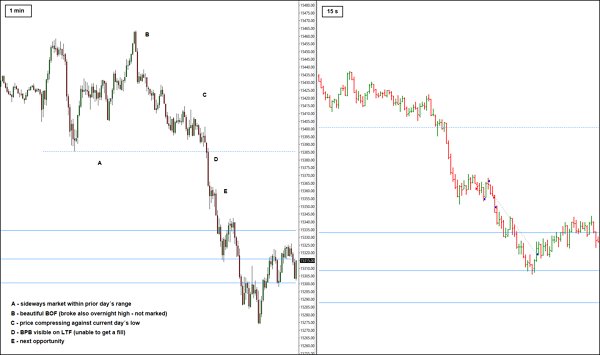 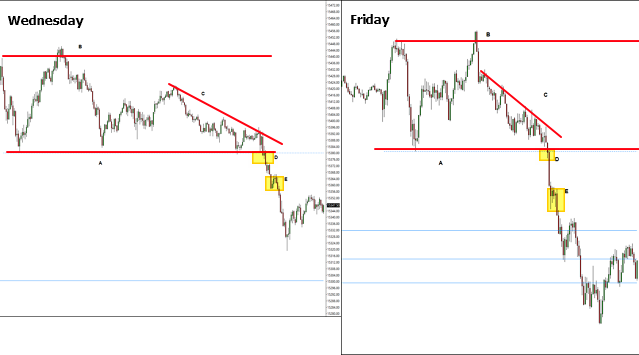 And a perfect example of the saying, “the market doesn’t repeat, it rhymes”.

Our trader encountered the first opportunity on Wednesday. And so when it set up again just two days later, he said “I could see it developing“.

This is what you should aim for – the ability to recognise common patterns of behaviour within the market as they happen at the hard right edge of the chart. Increasing the likelihood of quality decision making. And giving you every chance possible of profiting from this price behaviour.

When you find repetition like this, study it. Find the features common amongst all (or most) of the trades. And develop rules of thumb for how best you might enter and manage the trade, when they set up again in future.

There is opportunity here. Be sure you’re ready for it.

But what is it that I love most about this email?

It’s not the technical aspects of the price action or the trades.

But rather the love for the game conveyed in the description… “I found both opportunities structurally beautiful and thought you might like them too.“

This was more pleasing to me than anything else. And it’s what prompted me to share the email and trades via the newsletter.

I know that ultimately we’re all here for the money. But that’s not enough. If that’s all that brings you to this game then you’re facing a rather empty life. And I seriously doubt you’ll sustain the effort through the learning curve and beyond.

Find something in the game, in the challenge, in the price action, or in the trades, which lights a fire within you. Something that you can look at and say, “I find this beautiful!”

That’s the passion needed to truly become a trader.

I absolutely love this market open on Tuesday. Let’s look at the daily chart as at the close on Monday. The Permabears must be feeling pretty good about themselves right now! Surely this is the big crash they’ve been warning us about for years. The daily chart plays a very minor part in my trading….