The following was a reader email, regarding some specific price action on Jan 29th, 2011, in the EUR/JPY:

I have question for you. I have attached a 5 min chart on Friday as a JPEG file.

Note the candlestick in the circle which is very long and sudden up and down. Also the shadow extends outside of the narrow band, which I’ve drawn as a green line. 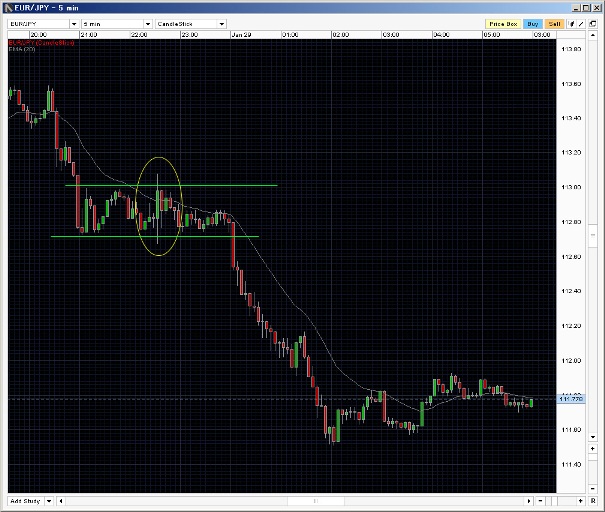 Good question… I might add this one to the newsletter!

EUR/JPY offered very little opportunity in this session, unless one was trading a simple breakout entry strategy beyond 10:00 ET.

Let’s have a look at the charts. You’ll find attached both a 5 min and 1 min chart.  (displayed below)

Looking at the 5 min you’ll see that the candle you highlighted with the upper and lower tails is the result of the Advance GDP economic release. As this is a potentially volatile news release, there would be no reason to be trading at the release time. The upper and lower shadows show rejection at both higher and lower prices. Any movement higher was attracting sellers. Any movement lower was attracting buyers. And the market then settled into a period of tight sideways movement for an hour and a half. When this happens, you can often look to the next fundamental event for a potential breakout event trigger. That occurred just following the Revised UoM Consumer Sentiment release.

How could this have been traded? It’s easy in hindsight to say that all one had to do was fade the upper and lower portion of the Advance GDP news candle, although in reality there was no great reason to expect breakout failure in either direction. Have a look at the one minute chart. The 5-min news candle is represented here through the initial spike down to A, then rally up to B. The lows at A didn’t offer any entry opportunity. Once again in hindsight, you could say that B may have been entered short as that provides an entry in the direction of the original pre-news trend. I doubt I would have though, due to the potential for this news event to change the supply/demand nature of the market.

Let’s assume that we didn’t enter short at B, and preferred to wait for clearer bias.

That’s often a good plan, but in this case the post news price action didn’t offer a lot. There are a number of possible triggers short and long which may have been attempted, but nothing really produced profitable results. I’ve circled the best of these opportunities on the one minute chart. The first shows as C, being a pullback to the area of initial news release, showing rapid rejection of the lower prices. The second (at D) based on the same premise… another test lower having failed. Neither carried through to higher prices, although both should have offered at least a breakeven result, if not small profit.

Would I have taken them if trading this live? Unknown. Momentum analysis between B & D gives a slight bias to the bearish side, but the tails at C and D did show good rejection of lower prices.

Beyond D, there’s very little opportunity at all.

The breakout itself, as you can see on the 5-min chart, did not offer any decent pullback entry. So unless you were a breakout trader entering short on the break of the GDP candle lows, you probably missed this move. Several hours sitting at the screen, for little to no profits at all. That happens. But on the positive side, risk was managed and you survived to trade another day. So, it’s all good.

I love this part of a recent email conversation with a reader: “Why do you hate indicators so much? You can’t beat the simplicity of an MA crossover for holding the trend.” Haha. “Hate” is a bit severe. I honestly don’t hate them at all. I use some indicators. The YTC Scalper lower timeframe template…