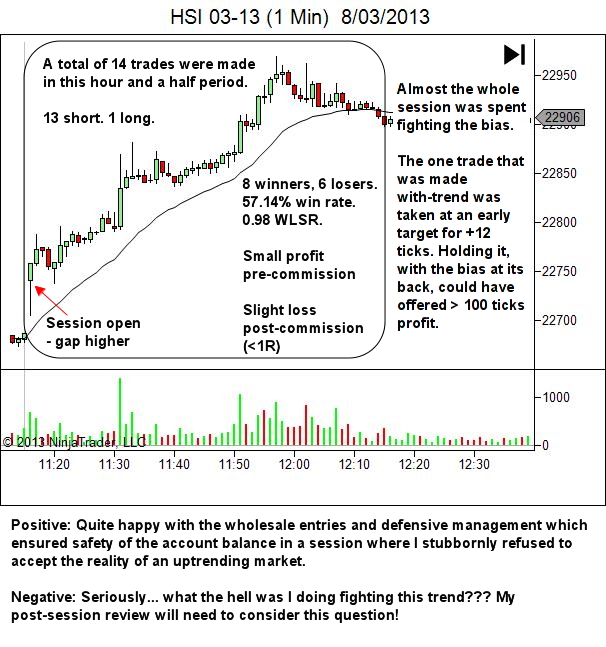 Well, my post-session review did consider this question.

In fact, the answer was obvious to me even as I traded the session. I knew I was fighting an obvious uptrend from maybe the second or third trade, and yet I still didn’t flip my bias and operate LONG.

The answer will disappoint those of you looking for a simple price action explanation, such as “Look at the above chart at time xx and you’ll see pattern xyz. Upon seeing such a pattern you should always operate in the direction of the trend”.

It’s not that simple.

Actually, from a price action perspective it is that simple. The trend was obvious to all, regardless of which method of trend identification you prefer.

But from a human performance perspective, it’s never that simple. 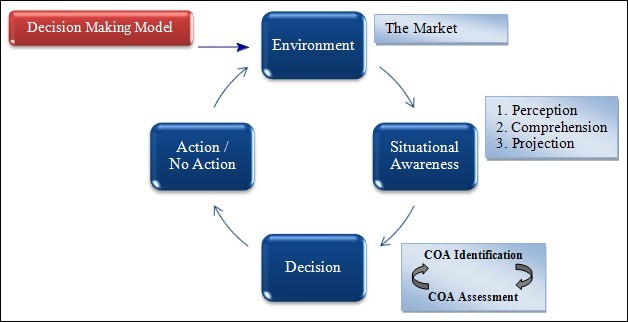 … and lists the many factors which influence the quality of our decisions.    (* COA being a Course of Action) 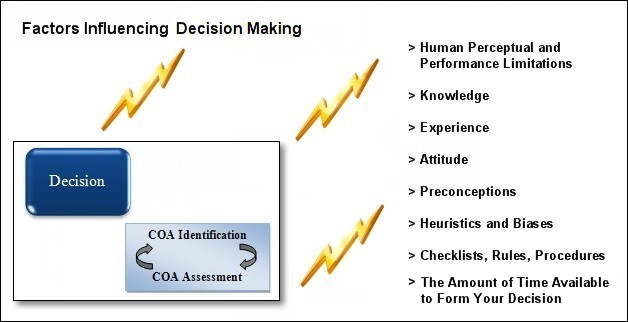 In trading this session, my decision making abilities were impaired due to FATIGUE, one of the key factors under the heading of Human Perceptual and Performance Limitations.

It’s a natural human response to want to fight a trend (for reasons we won’t go into in this article). Certainly for me, this was a huge problem to overcome in my formative years. I’m rationally aware of the problem, and on most days are able to happily pass on what appears to be “obvious” counter-trend setups, and use their failure to trigger an entry with-trend. On this session though, I reverted to old habits.

Fatigue has been a topic of interest for me for many years. We’ve discussed it previously. (See here)

And we’ve seen research evidence that short-term sleep deprivation can provide serious impairment to our performance. Being awake just 17 hours impacts upon our decision making and performance to the equivalent of having a blood alcohol concentration of 0.05% (the legal limit for driving in Australia and many other nations around the world). (See here)

As a result, my trading plan has included a component designed to minimise risk from short-term fatigue. I don’t trade if I’ve had less than 5 hours sleep in the last 24 hours, less than 12 hours sleep in the last 48 hours, or currently been awake for longer than the amount of sleep I’ve had in the last 48 hours. It’s an absolute minimum standard so as to be not too restrictive. And I have decided on occasion to be more restrictive and to not trade despite meeting these criteria. Generally, it’s worked well over the years.

Here’s the current problem though.

While this combats short-term sleep deprivation, it does nothing to manage the risk of longer-term, cumulative fatigue.

And cumulative fatigue is perhaps a greater risk, as it can creep up undetected over several weeks or months.

For the last couple of years, the US futures markets have been my market of choice. Lately that has solely been the Crude Oil futures (CL). The challenge for me is that in my timezone this market opens at midnight so I’m typically working from around 10:30pm through till about 04:00am. Try fitting that into a family situation that is operating on normal daytime hours, and it’s a recipe for long-term cumulative fatigue.

My trading plan includes simple and objective procedures for dealing with short-term acute fatigue, as discussed above.

And I’ve made partial attempts at dealing with the issue of longer-term, cumulative fatigue, through allowing a change to daytime markets for an occasional period of “recovery” from constant night-shift. That was the reason for trading Hang Seng this last week – a decision to spend a few weeks on daytime shifts in an attempt to recover some of my sleep debt.

And yet, despite recognising the fact that I was overly fatigued, and despite taking action to change to a more easily managed day shift for a while, I still ended up trading in a less-than-ideal state.

In trading this session, and the four days prior, I was clearly both physically and mentally exhausted. I was yawning throughout. I was easily distracted. I was disinterested in results. And in fact it was clear to anyone who looked that my standards had dropped all week, as my pre and post-session routines were deficient in several areas, and I’d discontinued my usual during-session routine of listening to isochronic tones and monitoring my heart-rate variability via the emWave.

So here’s the problem…

(1) I say I’ve made a “partial attempt” at dealing with the issue of longer-term, cumulative fatigue, only because the decision to make this change is a subjective one.In my experience I typically find I make this decision a few weeks later than when I really should make it. I’ve added a task to my “task-list” to review this decision and attempt to either make a more objective plan (eg. one week off each two months, or one four-day relaxation weekend each month). Or alternatively to make the current transition to Asian (daytime) markets a permanent one. The final decision is not yet made.

(2) I haven’t managed the obvious risk of increased fatigue during the transition from one timezone to another.

It’s a well known fact that the human body and mind does not cope well with the transition from one timezone to another. Whether through jetlag associated with extensive travel, or through the difficulties faced by shift-workers in changing between their day and night roster, a period of transition is necessary in order to ensure the person operates with acceptable levels of physical and mental alertness.

By transitioning from night-shift to day-shift, in order to recover some sleep debt, I was inadvertently making the problem worse for a short period of time.

I hadn’t really considered this before. Previous transitions between US and Asian markets did not raise the issue. Perhaps the weekend between the two in those cases was sufficient to provide recovery. Perhaps I managed to survive with increased fatigue, without any observable effect. Whatever the reason, the risk raised it’s ugly head this time, and I consider myself lucky to get away relatively unscathed. Timezone transition does present a risk and needs to be appropriately managed.

Solution – An Addition to my Trading Plan:

When changing from “night shift” US markets to “day shift” Asian markets, or vice versa, or any other similar situation that involves a change of trading times to the time period that is usually spent asleep:

I’m well aware of the fact that some of my readers operate with similar timezone and night-shift challenges. If the above trading plan amendment helps just one of you in identifying a risk you haven’t appropriately managed, my job here has be well done!

International football (soccer) is one of the few things that I will allow to interrupt my trading. I have no idea why I would encourage such masochistic behaviour. Following Australia in the international arena is more often than not a frustrating and disappointing way to spend my time. But it is what it is. And…

I do love a strong gap opening. So let’s begin Friday 31st July 2020 with NQ gapping higher. We’ll start with the 30 minute chart (RTH session data only so that we see the gap). Let’s drop slightly to the 15 minute chart and include some overnight data as well. So let’s prepare for the…

Metagame Entry – Recognising that entry is not just about price or patterns, but about the people behind the price and patterns. And in particular the times when they’re experiencing frustration, pain and disappointment. Because the best opportunity comes when I can feel someone on the other side of the market getting it REALLY wrong….