Had a question on breakouts. I know you subscribe to the breakout, then wait for a pullback to get in. I was monitoring GBP/USD last night. I set an alarm for if price got up to resistance at 1.5080. It then broke thru. Sticking to my rules I chose not to enter but to instead wait for a pull back. Which it did after first shooting up 30 pips or so. What I wanted to know is specifically how you play breakouts. That is, after the pull back…what triggers you in? Do you wait for another breakout,….perhaps on a smaller timeframe? Or do you maybe look for a pullback to a minor support area and then enter and NOT wait for momentum to kick back in in the direction of the breakout (that is, not to take out another additional high), etc.? Things like that. Because what I am doing now will involve more and more of entering after price breaks thru. And I want to make sure I play these right without getting burnt too often on false breaks.

Very much appreciate your thoughts on this.

How I trade the pullback really varies depending on the context of the situation.

I assume this is the chart you were referring to, where the 1.5080 level formed resistance based on the July 12th swing high. 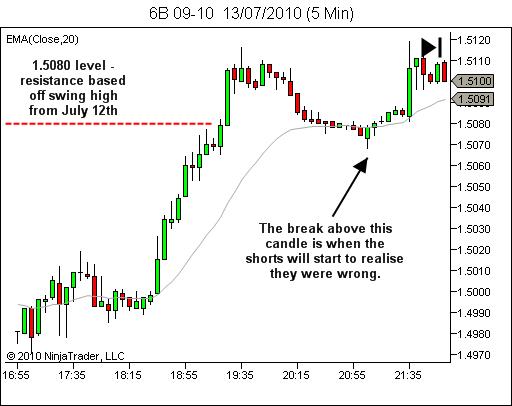 On breach of that level we have a surge for 30 pips or so, as you mentioned. Then the pullback. We can see the initial stages of the pullback appeared to be enthusiastically supported by the bears, showing some strong selling. Most likely though, a large part of this bearish orderflow was late longs bailing out and early longs taking some of their profits. After two reasonably strong red candles, the bearish pressure clearly dried up, indicating lack of commitment from the shorts.

My “no later than” entry point is the point at which the shorts realise they’re wrong. In this case, it’s the breakout above the green candle referred to in the image.

See the lower tail. This candle started its life as a continuation downwards, sucking even more bears into the market, before turning around and smashing them. Shorts will start to exit on the break above the candle. At least that’s my assumption. In this case (with the benefit of hindsight) it appears that the bulk of the selling was a little higher, as the market stalled in the 5080-90 level for 5 or so candles before really exploding upwards.

So, that’s the general principle – find the place where those trading the pullback are going to realise they’re wrong.

Now, this is not necessarily my entry point. Rather it’s my “no later than” entry. I don’t chase beyond that point.

I look to a lower timeframe chart (1 minute) to try to work an entry. Remember – I don’t know that the 5 min chart is going to create this candle, but price has retraced to around the point of original breakout, so I’m watching both timeframes to find some sign of shifting sentiment, back towards the bulls.

The actual trigger will vary. Sometimes if the setup provides a good solid S/R area to work against I’ll use the lower timeframe chart to try to work a limit order entry as close to S/R as possible. In other cases such as this one, where there’s not a high quality S/R level, I’ll probably be waiting for a lower timeframe trigger such as the one that occurred in this case (as shown below). 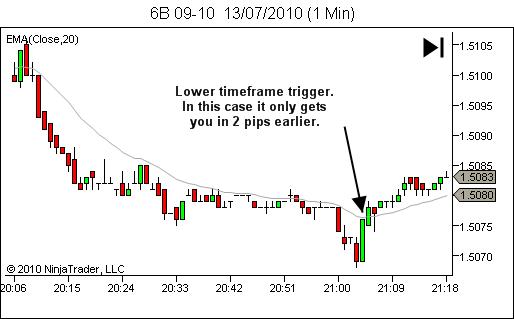 The 1 min candle gives us an entry on the close of the large green candle, as it traps the late shorts in a losing position. This time, the lower timeframe only gave an entry 2 pips early than the 5 min chart. Other times it provides more. I’ll take whatever the market gives.

Hope that helps a bit. I know it’s difficult when the answer is “it depends on market context”, and this is one of those cases when that’s a fact. This particular trade would have been entered on evidence of lower timeframe momentum & breakout. Other times that’s not the case.

The following email was received from a YTC Price Action Trader reader who has had a breakthrough in understanding how price movement (or failure to move) can influence trader sentiment. Well done! The next step is being able to see this effect playing out across two timeframes, seeing how the shift in lower timeframe sentiment…

Monday started with some obvious expectations.   It’s a simple plan to start the session. A sideways trend in the pre-market, with clear and obvious range boundaries to trade off (BPB / PB) as the market drives hard for either gap fill or gap continuation. But wait! Do you remember this from back in February? …

Email Question: Hey Lance, Thanks, I believe some of your knowledge held in trading is very wealthy to your students and viewers. I have a few questions on Candlestick Reversals please. 1. Some candle patterns like Hanging Man and Hammer are same in body form but different in which trend they appear, how should we…

With hindsight, Tuesday's Crude Oil session started off the first few hours as a narrow-range sideways low volume market. Note to self – I've often said I should avoid rollover day. One day I should listen to myself. In a ranging market, the best opportunity is usually found at the edges, in particular when it…