You may recall the first trade in the sequence we discussed last week.  (See last week’s article if you missed it!) 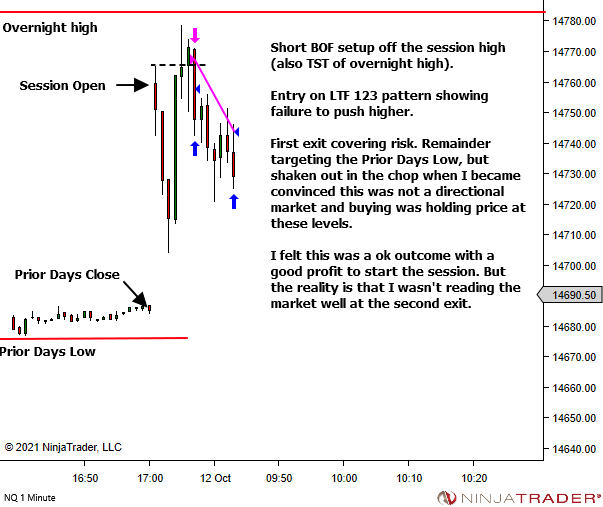 This led to a comment I quite like, which I think deserves a better response than I gave at the time. 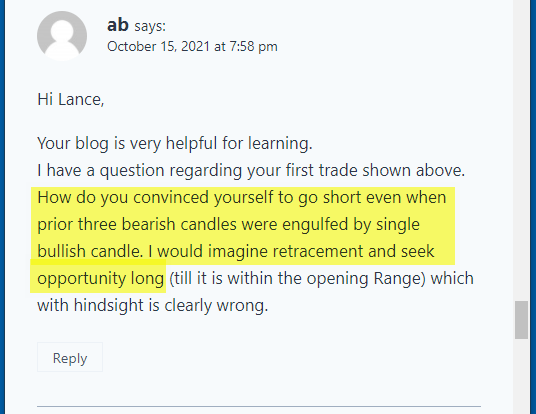 There are some contextual reasons why I was not considering opportunity long at all. We’ll get to them later in the article.

First though, I think it might be interesting to look at the sequence from a purely price-action perspective (in the absence of wider context).

Because yeah… you’re right that it looks bullish. 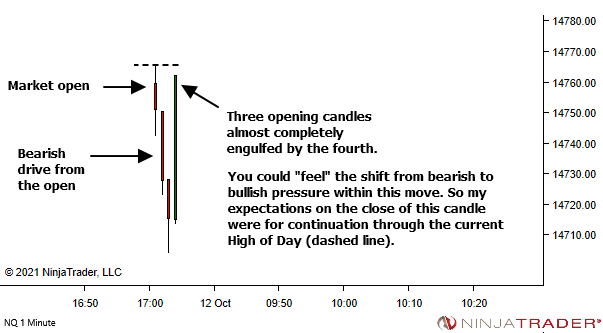 Granted, there is not a lot of trend structure formed yet. But there is enough to have a current “High of Day” and we do have a strong move pushing to this level.

So actions at this stage are to hold. Wait. Let it break.

I don’t just enter long because of the bullish pressure into the high of day. Let it break. And then assess.

Because FAR MORE IMPORTANT to me than the way price approaches the level, is how it behaves ON AND AFTER the break.

Students of the YTC Price Action Trader methodology will know that there are two general scenarios that interest me here. 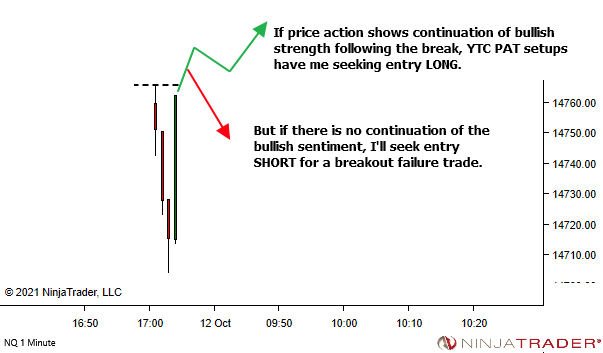 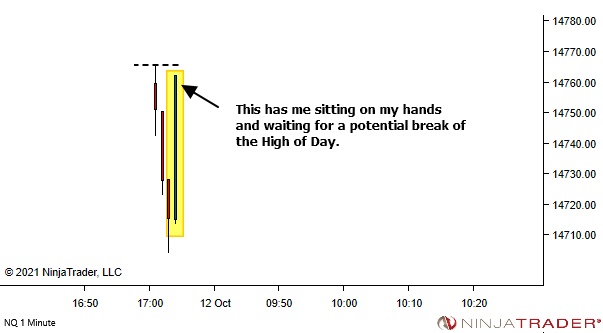 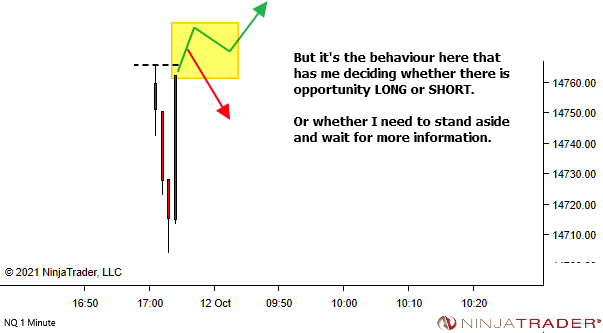 And so this is what I saw following the breakout. 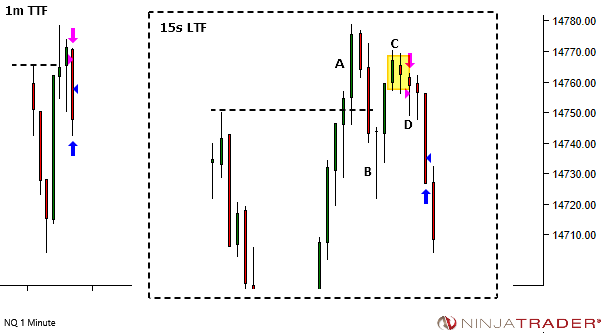 From the static chart it looks easy. Two pushes through the level with the second unable to reach as high as the first. Entry short on a failure of that second push higher.

In real-time there is a lot more uncertainty as you don’t get to see the full “finished” picture.

Swing by swing though…

A and B showed a good fight between both bulls and bears, with signs that both parties want to take control. Wait… more information is needed.

C is just beautiful though. Candle ranges have narrowed and price has stalled. I call this a tipping point. The initial fight is over and everyone pauses to rest. The break from here is where we see which side takes control.

Price breaks lower at D, with entry taken on a retest.

Had the stall region at C broken higher, this might be reason to seek entry long, with B & C being two attempts to push lower with C unable to break B.

But that didn’t happen. And I wasn’t even considering opportunity long at all.

Let’s talk wider context now, to answer the question as to why the only direction that interested me was short. 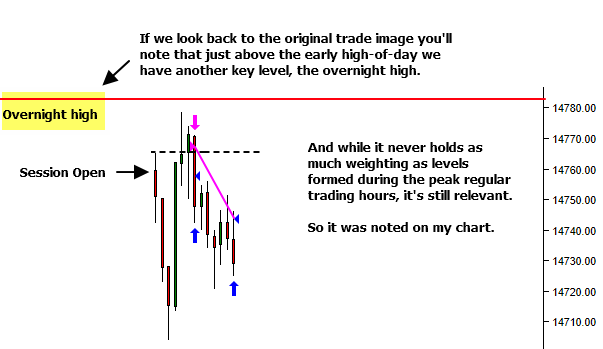 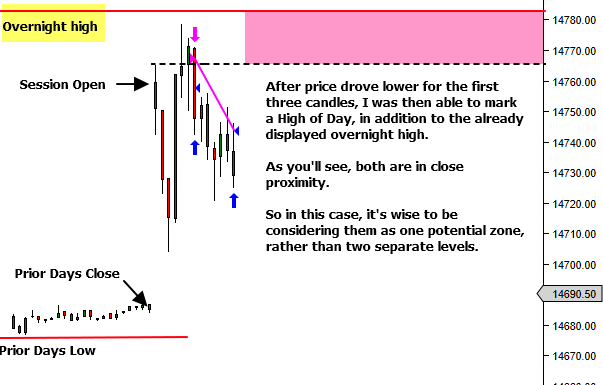 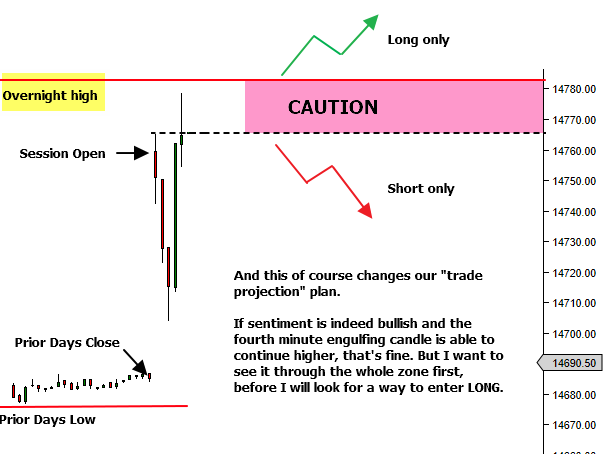 And it gets even worse for the LONG scenario, if we look further back into the prior day’s action.

This was not shown last week, as it was not relevant to the article. But there is a whole lot of additional S/R congestion just above the overnight high. 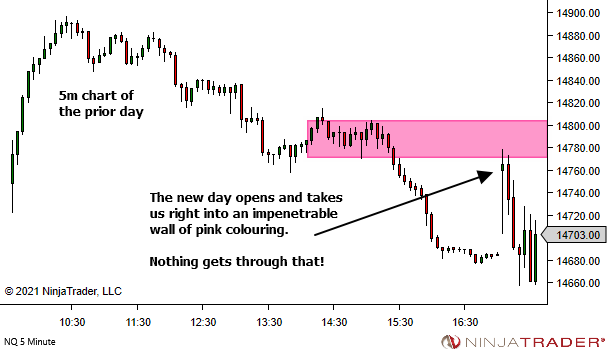 If price was indeed bullish and able to push above the overnight high into this region, I’ll reassess the plan.

But until then, I was playing for short only. No interest in longs. They can wait. They need to prove to me that they’re worthy of further consideration.

Just because the general principles for trading off an S/R level include plans for both long and short, doesn’t mean you have to seek opportunity in both directions.

If you prefer the context around one direction over the other, you can play that direction only.

And should the other prove the winner, so be it. Reassess. Update your plan. And get back to work.

So why did I enter short there? Why not long?

Context had me limiting action to short only at this stage. And the TTF/LTF action on a push through early high of day (but into the wider zone incorporating overnight low) gave a nice trigger entry short.

Take it. Manage risk if it’s wrong. Manage opportunity if it’s right. And move on to the next.

Here’s some great Q&A with a YTC reader: Question: Hi Lance, I wanted to ask what do you do in a situation where price retraces just enough to scare you. I mean let’s suppose we just trade with one contract to make things more interesting. We consider setups that offer a 2:1 as R:R. You…

Some words of wisdom from back in my days as a pilot… "Never let an aircraft take you somewhere your brain didn’t get to five minutes earlier." It’s essential as a pilot to stay ahead of the aircraft. This means projecting your awareness ahead of your current location. Anticipating what is coming, considering what that…