Let's examine the opening hour and a half of the emini Dow from Tuesday's session.

As seen in the charts below, the session commenced with a sequence of trades where I was out of sync with the bias of the market. And then another when I was completely in tune with the market. 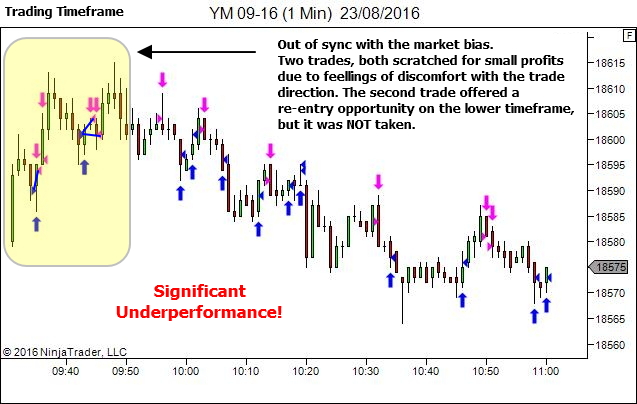 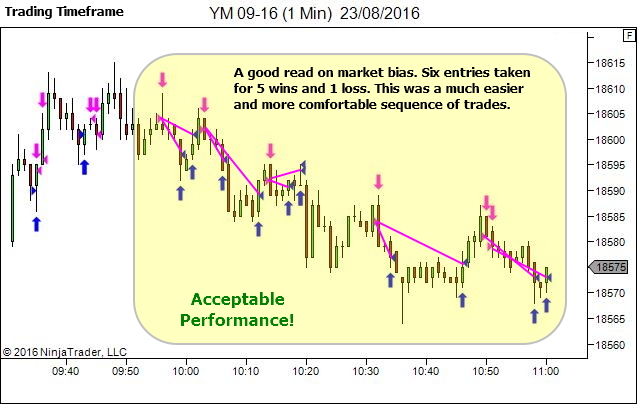 Ok, so the sequence where I was out of sync still resulted in a small profit. That's cool. I'm certainly not complaining.

But the fact is that there is potential for significant damage to an account balance if you don't quickly recognise and adapt to this "out of sync" issue. In the past, I'd usually take several losses out of a sequence like this, typically trying to fade the move two or three times before giving up in frustration.

So, there are some lessons to be learnt.

First though… what exactly was going on that resulted in me being out of sync with the bias?

Let's start with the daily and 30 minute charts, in order to get some context. 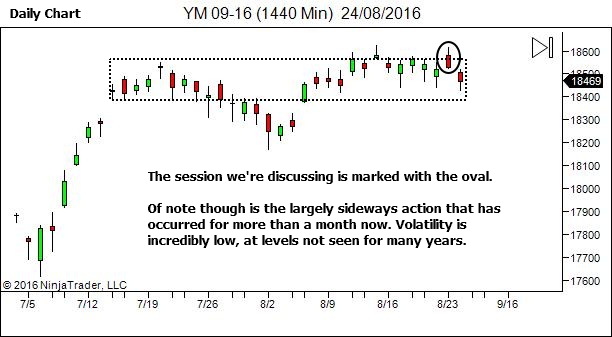 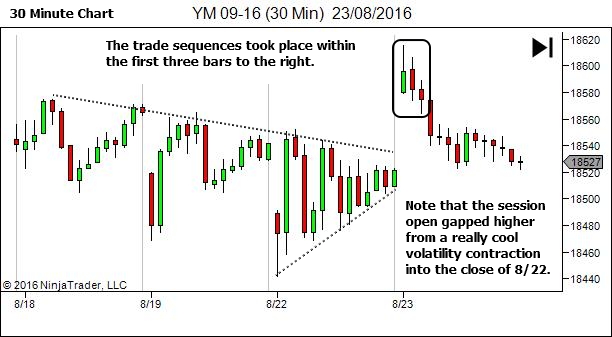 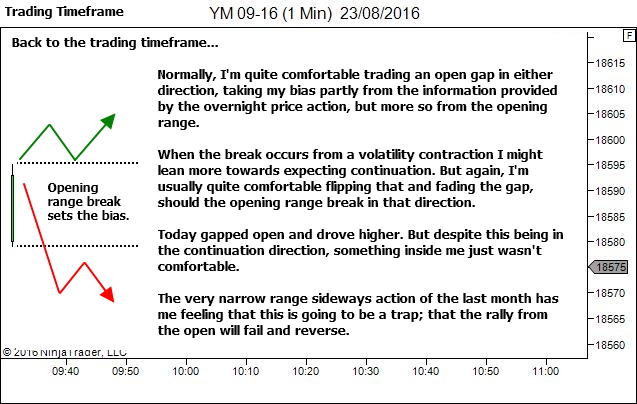 There is a saying in the trading industry:

What this means is… since I can see the the market is moving higher with a BULLISH bias then I should trade from the LONG direction. It doesn't matter at all what I think the market should be doing. Trade what I see.

And yes, normally that is not a problem. I'm usually ok with dropping my expectations and trading in accordance with the market bias.

But not this day. The feeling was too strong.

And although I was able to enter LONG on two really good signals, I just wasn't able to hold. The trades were scratched for small profits.

So I decided to stand aside and wait for the market to turn.  (Accepting of course that if it just trended higher all day then I'd miss the bulk of the move. No problems. I'm fine with that.)

As a discretionary trader, you WILL have trade sequences in which you're completely out of sync with the market movement. It's a fact!

This internal feeling of unease WILL act as an input to your decision making. And it will influence both entry and trade management decisions.

Your job is to learn to recognise this as quickly as possible. And if you can't shift to the correct bias then take immediate action to mitigate the risk. Otherwise… you may find yourself quickly on the way to your session drawdown limit.

Set a trigger to catch yourself as soon as possible, when you do find yourself fighting the market.

One of our recent articles is perfect for this – https://yourtradingcoach.com/trading-process-and-strategy/two-attempts-then-reassess/

Is your gut feeling about market direction causing you problems? If so, take action to limit the risk.

You should aim to stack the odds as much as possible in your favour. A MASSIVE part of that is having a good read on market bias.

PS. To take it to the next level, consider adding this to your post-session routine:

1. Take note of any price sequences which resulted in multiple attempts to trade the market from the wrong side.

2. Review the conditions – market structure, price action and human performance factors – which may have influenced your decision making.

4. Over time, you'll start to identify those conditions which have the potential to put you out of step with the market, allowing you to recognise and adapt more quickly in future.

I thought I’d finished the “Long is Wrong” articles for now. But then I received an email from a reader of the YTC Newsletter that I absolutely LOVED. And I thought that maybe “Long is Wrong – 3” would be a good way to share some of that love! If you missed the prior articles,…

This was an interesting sequence of trades – three which I got completely wrong, followed by one which I finally got right. The key takeaways: You won’t always get it right. Sometimes your timing is out. Other times, like in this sequence, your assessment of bias is just wrong. Good entry location and good active…

You can't catch every good price move.   You can't catch everything. If you miss a good move, remind yourself: It wasn't mine to take. If it was, I would have caught it.   Now focus. There is more opportunity coming and it needs your full attention. Happy trading, Lance Beggs

When I identify a setup area based upon the structure of the market, one thing I absolutely love to see is a double failure pattern. The double failure pattern was discussed in a prior article (https://yourtradingcoach.com/trading-process-and-strategy/the-double-failure-pattern/) and involves two failed attempts to breach a significant structural area of the chart. Entry is on the failure…

I'm always VERY interested in these places on the chart – the places where price can't go. The places where it tries… it pushes… but it just can't go there. This is opportunity. Let's start with the Higher Timeframe chart… Let's switch now to the trading timeframe…  Reference… this is a BOF Setup as described…